A few weeks ago when I made ceviche I chopped a little too much halibut, scallops and shrimp and so froze some in a ziplock bag to make seafood chowder with another day. Tonight, I came across that little frozen white lump while rummaging around for ice for my coffee.

For some reason, seafood chowder seems like a summery meal (all that fish), when in fact it’s better suited to a cooler fall or winter day (all that heat). As if we weren’t melting enough before dinner, now we’re practically puddles on the floor.

But it was tasty. When I go to make something like this, something that I don’t often make, I flip through a few books and search a few sites to see what people in the know are doing with it. I read about New England Fish Chowder from 50 Chowders: One-Pot Meals — Clam, Corn & Beyond, in which it is referred to as “the gold standard of chowders”, but which only used fish, onions and potatoes; no corn or other seafood. I found a similar recipe for corn chowder, this time thickened with flour and flavoured with garlic, in The New Best Recipe put out by Cooks Illustrated (a truly fantastic resource, sort of a new-era Joy of Cooking; it explains everything, experiments and illustrates what happens if you do this or that). In the end I sort of morphed what I had read with what I would have done had I just winged it to begin with – soups are easy to do that way. I let the potatoes thicken the broth rather than use flour, and added just half a cup of half & half at the very end to make it creamy without being as crazy high-fat as those versions made with copious amounts of heavy cream. 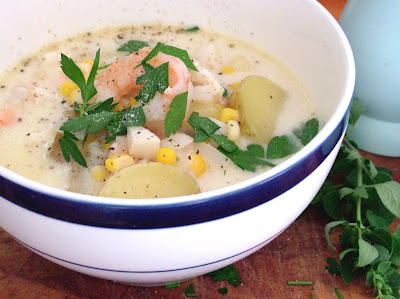 (all measurements are approximate)

a drizzle of olive or canola oil

a small lump of butter

1In a medium-large pot set over medium heat, melt the oil and butter together and saute the onion for about 5 minutes, until soft but not golden. Add the thyme and bay leaf and cook for another minute. Add the potatoes, corn and stock - make sure there is enough liquid to cover the potatoes - if not, add a little more water until it does.

2Bring to a simmer and cook for 10-15 minutes, until the potatoes are tender. Dump in the seafood and stir until it turns opaque - this should only take a couple of minutes. Don't overcook the shrimp, or they will curl up and get tough. Stir in the cream and season with salt and pepper.

3Divide among bowls and sprinkle with parlsey or chives.