It’s my ma-in-law’s birthday today and the plan was to take her to Earls for dinner, but the cold weather and news reports warning of dangerous driving conditions convinced her to not leave the house. Which was a bit of a relief. I came extremely close to ordering Inglewood Pizza, but instead made pita pizzas and am, I’m certain, a better person for it.

I assume you know what pita pizzas look like already, so I’m going to tell you about the fruitcake I made this afternoon instead; it was an idyllic hour spent with low sun coming in the kitchen windows, sparkly blowing snow, and one of Mike’s Christmas CDs (modern-day mix tapes) playing Ella Fitzgerald and Red Skelton and Suzy Snowflake and Do They Know it’s Christmas?

I have been positively itching to make fruitcake. Getting panicky about it the way I got panicky about having not yet made a pie by almost the end of summer. I have this recurring dream a handful of times a year where I wake up on Boxing Day, and I’ve missed Christmas entirely. I think I’d have a similar reaction if I never got around to making fruitcake. I posted our most often-used fruitcake recipe earlier this fall when Sue sent me a chunk – we’ve always used the dark fruitcake recipe from Joy (if you have the right edition – Sue went out to buy her own copy a few years ago and the dark fruitcake recipe was completely different), but I decided to tiptoe out of my comfort zone and poke around my bookshelf to see what might be in the old cookbooks I love to accumulate. I pulled out the Fannie Farmer Cookbook and found a dark fruitcake (is there really any other kind?) she describes as “distinguished” – perfectly suited to this family if there ever was one.

The dark version looked a notch simpler than the one I’m used to, and is (refreshingly) made in loaf pans instead of the Bundt pans and finicky ornate little tube-shaped pans I generally use, which I love but generally sweat over getting the cakes out again and end up with at least one in pieces, which isn’t really so much a problem as an excuse to nibble, but still. I made Marion’s loaves in disposable aluminum loaf tins from the dollar store, so that I can wrap them and give them to Fiona and Jennifer’s sister-in-law Linda in their Christmas baking packages. (I decided to draw two names, just because.) Of course the problem with this plan is that I can’t actually eat them myself. I can’t figure out a way to discreetly slice into them without anyone noticing.

The thing to remember about fruitcakes is that they can be made with whatever dried fruit you like – it doesn’t need to be glace cherries and candied citron (that rainbow-coloured glace mix you buy in little tubs, I warn you, is mostly rutabaga, which being cheap and benign is the perfect vehicle for food colouring and sugar syrup) – you could use real dried cherries (although they do cost about as much as platinum), dried pears, apricots, figs; whatever you like. Although it is worth it, I think, to source out some real candied citron, or make it yourself if you have the gumption. If not, adding the grated zest of an orange will give your fruitcake the flavour you’re after. 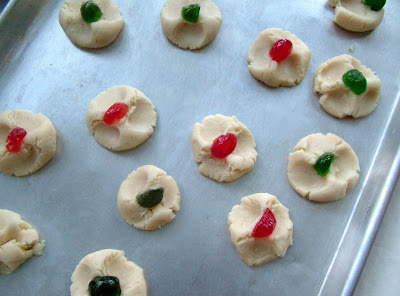 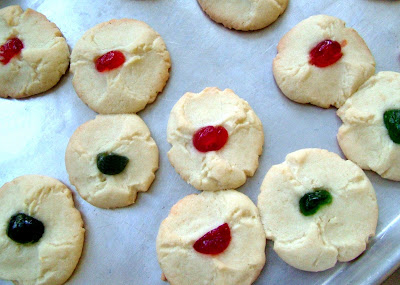 Having hung out for a spell in A’s kitchen this afternoon while she whipped shortbread, I needed to go home and make some too. Having read so many fond memories of shortbread with little cherry bits in them, I felt obligated to W to provide him with similarly kitschy shortbread with cherry bits to remember decades from now. And when I was digging around in the cupboard full of bags of grains and dried fruit and miscellaneous powders I came across a tub of candied cherries from last year, and took it as a sign.

Also, I’ve been thinking about Sarah’s comment her mother-in-law’s shortbread pressed three times with her thumb, like a pansy, which seems like something my Grandma would have done, so I wanted to try it. So I mixed up a batch of Marion’s Sugar Cookies (hey, another Marion!) and gave it a try (W helped), but don’t think I pulled off the pansy effect. They were delicious anyway. adapted from The Fannie Farmer Cookbook by Marion Cunningham

grated zest of an orange or lemon

1Preheat the oven to 325°F. Line two 8"x4" loaf pans, line them with foil, then butter the foil. Cream the butter, add the brown sugar and orange or lemon zest and beat until light. Add the eggs and beat well, then beat in the molasses. Mix together the flour, baking soda, cinnamon, allspice, nutmeg, cloves, and salt; add half and beat just until blended. Add the milk and beat until smooth, then beat in the rest of the flour just until combined. Stir in the candied fruit, citron, raisins, and pecans with a spatula.

2Spoon into the pans, smooth the tops and bake for 1 to 1 1/4 hours, or until the top is springy to the touch. Let sit for about 10 minutes, then turn out of their pans onto wire racks to cool. When completely cool, wrap well and store in an airtight container.

3Brandied Fruit Cake: Soak two large pieces of cheesecloth in brandy. Wrap each fruit cake in the cheesecloth, covering all sides, then wrap well in foil. Moisten the cheesecloth with additional brandy every few days for about a week. The brandy will flavor the cake and help preserve it too.