I love them. Like hysterical Bridget Jones love. (“I’m not sleeping with them both at once – I accidentally slept with each of them separately.” – Bridget to Shaz on Daniel Cleaver and Mark Darcy) For awhile I was so voraciously addicted that I bought a box more than a few times a week – like picking up a pack of cigarettes, only pricier. So I set about figuring out how to make them myself. The ingredient list looked an awfully lot like Boston brown bread, so I gave it a go.

Easier than pie: you stir up the dry ingredients, pour in some buttermilk, brown sugar, honey and the all-important rosemary, raisins and pecans, and bake the batter in two loaf tins until golden and firm. Freeze them – this makes it easy to slice them really thin, and then bake them again, like you would biscotti. The result is astonishingly similar, and keeping the loaves in the freezer allows you to slice and bake a batch at a time (about a half a loaf works for me) and keep the rest for another time. This recipe equals about four boxes.

None of the subsequent varieties have been able to replace the original rosemary-raisin-pecan ones for me, but I’m sure you could adapt the stir-ins to make these fig-olive or cranberry-hazelnut. My favourite accoutrements are Sylvan Star old Gouda, soft, spreadable goat cheese or mild, nutty Oka, which I have in my fridge but was actually afraid to unwrap, lest I polish the whole thing off myself. Don’t think it won’t happen. So today I’ve been practicing safe snacks and eating them straight-up. 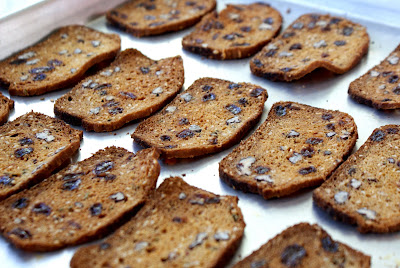 2In a large bowl, stir together the flour, baking soda and salt. Add the buttermilk, brown sugar and honey and stir a few strokes. Add the raisins, pecans, pumpkin seeds, sesame seeds, flax seed and rosemary and stir just until blended.

3Pour the batter into two 8x4-inch loaf pans that have been sprayed with nonstick spray. Bake for about 35 minutes, until golden and springy to the touch. Remove from the pans and cool on a wire rack.

4The cooler the bread, the easier it is to slice really thin - you can leave it until the next day or pop it in the freezer. When you're ready to bake them again, preheat the oven to 300°F. Slice the loaves as thin as you can and place the slices in a single layer on an ungreased cookie sheet. (I like to slice and bake one loaf and pop the other in the freezer for another day.) Bake them for about 15 minutes, then flip them over and bake for another 10 minutes, until crisp and deep golden. Try not to eat them all at once.