My sister dropped off sick kids this morning and left them to languish on my couch all day while W tried (mostly unsuccessfully) to rouse them and I tried (mostly unsuccessfully) to get stuff done. I had bought some skinless chicken thighs and drums to test a “faux fried chicken” recipe, but instead decreed that they should spend the day in the CrockPot becoming butter chicken. 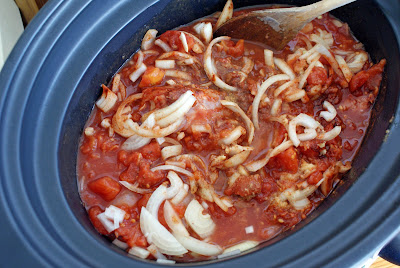 So I threw it all in, the drumsticks partially frozen, even, without bothering to brown anything first. (Which isn’t necessary, but does boost flavour.) At 5 I stuck a pot of brown rice on to boil, and stirred a bit of plain yogurt and a bit of cream into the finished chicken. After cooking all day the meat self destructed upon being stirred; I just plucked the bones out. You could start with skinless, boneless chicken, but any meat cooked on the bone has far more flavour. 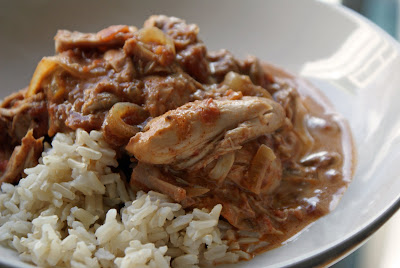 Better Butter Chicken (in the CrockPot)

It's easier to find chicken pieces with skin; I just pull it off at home.

1Throw everything but the yogurt, cream, salt and pepper into the CrockPot, cover and cook on low for 6-8 hours. Uncover, stir in the yogurt and cream, season to taste with salt and pepper, and serve hot over rice. Serves 6.

This was good for a laugh today.

One Year Ago: Cinnamon Bun French Toast and Chocolate Cake

38 comments on “Better Butter Chicken (in the CrockPot)”