I know better than to separate a whack of eggs at once without using a little dish as a buffer, in case I should nick one of the yolks and taint a half dozen whites. But I always get a little smug when I need to separate a lot of eggs into whites – it’s like my own private version of bungee jumping – and as if it’s a big deal to add one teeny more dish to the overflowing sinkful, I always just go ahead and live on the edge. And so the other day as I was making a hundred teeny pavlovas for my little cooking show at Stampede, I broke a yolk five eggs in. I tried to scoop out the offending yellow with a piece of cracked shell and thought I got it all, but those whites refused to reach their full potential and I was left with a bowl of flaccid meringue and nothing to do with it.

So I stirred in a capful of coconut extract, a cup or two of toasted shredded coconut, and spread it on two foil-lined baking sheets, then baked them in a 250 degree oven for an hour, as I would have had they turned out the way I intended. Once cool the slabs of meringue were easily broken into shards, which we have been nibbling on all week. I think I might be hooked. I’m dying to dunk some into melted chocolate. 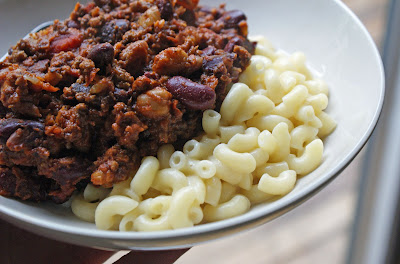 (Dinner this week has more often than not been chili, scooped out of a big pot in the fridge and reheated as necessary in between events and trips down to the grounds. I made some for the Stampede party last weekend, and my chef neighbour brought over another vat as he cleaned out his fridge to leave town, and I mixed the two together. Unfortunately this means we can’t figure out what makes it so damn yummy. It has tons of beans, chick peas, chipotle peppers and beef – ground and in chunks. Of course it gets better by the day – deeper and more concentrated. Speaking of mac & cheese – have you ever had chili served over a bed of it? If not, please do.)

One Year Ago: Bison Back Ribs and Blueberry Bison Burgers