It was a day for cheesy baked onion soup if ever there was one. I did take a stab at driving out to Red Deer this morning, the car loaded down with Boeuf Bourguignon, roasted tomato soup, chocolate-hazelnut-espresso shortbread and hot fudge sauce for 16, and managed to head out of town right when the storm hit. I did make it off the highway and turned around in Airdrie, although I pondered sitting in the Boston Pizza parking lot with a dozen or so other people sitting bewildered in their cars wondering what to do – instead I stuck it out and made it back, and in fact once back in the city pushed on to IKEA, since I was on the Deerfoot anyway and thinking no one in their right minds would attempt to go pick up a tree in all this. Apparently many other pre-weekend tree shoppers had the same idea. We now are the proud owners of a slightly malformed but delightful tree that will hopefully stay alive until Christmas. (Can’t complain, it was pretty much free.) If the needles start to prematurely start to fall off, we’ll spray it with green spray paint and call it fake.

The rest of the day was a marathon attempt at pulling the house back into some semblance of order, and looking back it’s a good thing we were shut in by the storm, because I have events tomorrow and brunch Sunday morning and then everyone arrives for our Julie & Julia party Sunday night. (We were hoping for advance copies of the movie to watch, but since they don’t ship out until Tuesday, Pierre has promised copies of Julia Child’s The French Chef on VHS.) So I’m proud to say that I’m lying on clean sheets right this very minute, and I cleaned off the top of the fridge (also known as our junk drawer) and even scrubbed the little space beside the oven where the cookie sheets go. As for the walls, we’re just going to have to paint them.

And of course on days like this, when stuff gets pulled out of cupboards and you’re so bent on getting everything dusted off and straightened out already that you don’t want to create the slightest new unnecessary mess, you get in the mindset of wanting something fast and easy for dinner, like a frozen pizza or grilled cheese sandwich, or maybe some cereal. And here we are smack dab in the middle of a generation that would hardly consider baked French onion soup something simple and fast, which it probably was in the pre-microwave day – I mean it’s onions and stock and bread and cheese, how much more basic can you get? (Don’t say chicken fingers.)

But it really was. I sliced a few onions and set them to caramelize in a bit of butter and oil while I went about my stuff. I stirred it now and then, at one point adding some flour and stock. I let it simmer again while I organized (!) the mudroom, which is most deserving of its name this week. Then I ladled the soup, which made the house smell fantastic as we worked, into bowls, topped it with roughly torn rounds of toast, grated over some cheese and ran it under the broiler. Really not much more work than making grilled cheese sandwiches, and there are few meals better than hot soup topped with crisped cheese when the snow is howling sideways past your window and your compost looks like a yeti.

And if it weren’t for Julia I would have thought I couldn’t make it, that I shouldn’t bother without Gruyère or something similarly meltable in the fridge. But she instructed Swiss or Parmesan, and I had Parmesan. The only thing I didn’t have was a nice crusty loaf; we made do with grainy sliced sandwich bread, crisped up in the toaster. No one complained. (Except W, who defaulted to oatmeal and raisins for dinner.) adapted from Julia Child's Mastering the Art of French Cooking

2 Tbsp. each olive or canola oil and butter

salt and pepper to taste

2Sprinkle with the flour and stir for a couple minutes, then stir in the stock and wine. Simmer for another 30 minutes. Taste and adjust the seasonings.

3Just before serving, stir in the cognac if you're using it. Julia suggests you place rounds of bread in soup bowls or a tureen and pour the soup on top; I ladle it into individual ovenproof dishes, top each with the toasted bread and sprinkle with grated cheese. Put them all on a baking sheet and brown under a hot broiler until golden and bubbly. Serve immediately.

And – just in time for the first big Christmas shopping weekend of the season – it’s Free Stuff Friday! 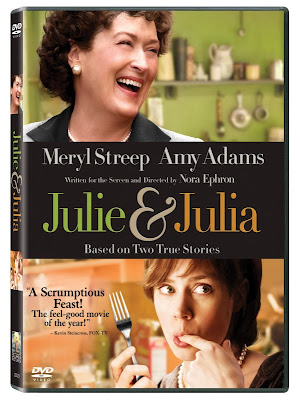 You’ll never guess what I have for you. Or maybe the image above has given it away – copies of Julie & Julia on DVD, courtesy of Sony Pictures! Fitting, no? Be the very first one on your block to have one for your very own – they ship out on Tuesday. And I don’t have just one, I have TWO! Two copies! So I get to choose two random numbers, which is very exciting for me because I love that part.

So in keeping with the theme, unless you had something particularly spectacular for dinner last night that you want to share with the world (or at least everyone here), do you have a favourite Julia Child recipe? or a favourite food scene from the movie? or anything remotely French? ever murdered a lobster? I think I’m going to take a stab at lobster thermidor (pun totally intended) on Tuesday night, to eat instead of popcorn in front of the movie.

One Year Ago: Curried Chicken Noodle Soup with Spinach and Chickpeas