Ta da! (Honestly – I didn’t even arrange the rosemary in this photo – it just came out that way.)

I’m really – for sure this time – bringing back Sunday Dinner.

I don’t mean that in the sense of reintroducing it to the world – I know this is something people commonly do – and yes, we’ve been eating dinner on Sunday nights for quite some time, but the tradition of bringing the extended family around the table for something that might even require actual napkins (as opposed to the omnipresent roll of paper towels) is something we’ve fallen out of the habit of. Not that it ever was a big thing in the childhood of my memory – throughout our twenties and most of our thirties we’d go to Mike’s parents house for Old Shoe Cooked in Beer, which we’ll just say didn’t foster the grandest memories. I’ve always wondered what it might have been like to marry into a big, food-loving Italian family who (in my fantasies) cooked through the middle of each Sunday to put on an early feast. Sort of like the afternoon equivalent of brunch. Mike and I used to say, back when we had a teeny apartment and no room, that we’d do this someday when we had a house. And finally – more reason than ever with my sister across the street – we’re instigating it.

I love the warm, chaotic bustle of a late Sunday afternoon and the collective sigh that follows as everyone disperses to finish their homework and get ready for the week. Even the overflowing sinkload of dishes doesn’t deter me. 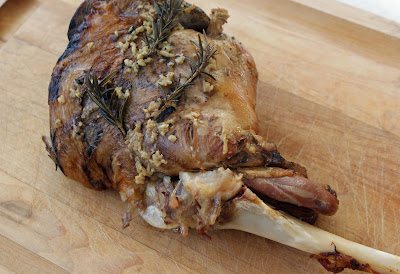 Dinner tonight was leg of lamb – done almost effortlessly in the slow cooker.

Wait, I missed a part.

I’ll preface this by saying that I’m not particularly computer-savvy. I don’t do Google analytics and track search engine keywords nor do I know much about SEO techniques. But when I do take a peek at my stats, down at the bottom of the page (if I manage to scroll down there) there is a list of search terms that were inputted and resulted in someone finding Dinner with Julie. EVERY TIME I’ve looked at this list, “leg of lamb slow cooker” is there. Every single time. So either a lot of people want to know just how to cook a leg of lamb in a slow cooker, or I’m one of few who have written about it on this here world-wide inter-web. So it has been rattling around the back of my mind to do it again sometime. 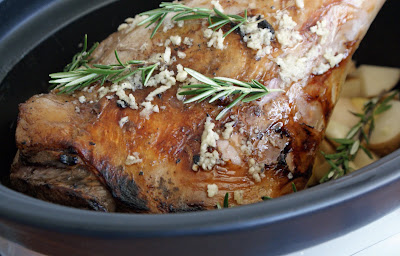 The prep couldn’t have been much simpler. At around 11 this morning, as we were about to leave for the park, I remembered that I had it and it needed to start sooner rather than later if we were to eat at a reasonable time. It’s size wouldn’t allow me to brown it (the bone put it at an angle in the pan) and so I turned on the barbecue and quickly seared it (to add flavour) while chopping some Yukon Gold potatoes into the bottom of the slow cooker. I tossed the lamb on top of its potato bed, threw in a bunch of garlic cloves, pressed another few and rubbed it on the lamb, tossed in some rosemary and a glug of wine, set it on low and went out. (Note: The bone stuck out, keeping the lid from closing, so I covered the lot in foil to keep the heat in, then draped a dishtowel over it to weigh it down and make sure no steam pushed through.) 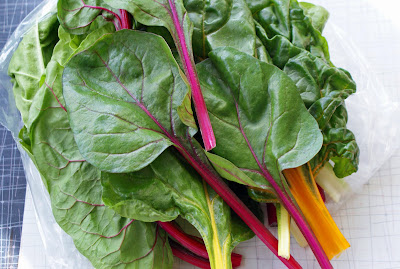 While we were out I found a beautiful bunch of rainbow chard from Hotchkiss Farms at Blush Lane, and so we also had roasted chick peas with garlic and chard – a perfect pairing for lamb. (I’ve become lazier about this dish the more I make it – I sauté the chick peas with a few cloves of garlic in a hot pan with plenty of canola oil until they darken and get crispy – throw in the chopped chard and some water or stock, lid it for about 10 minutes to cook the chard through, then take the lid off and make sure any moisture has cooked off, add salt, and it’s done.) 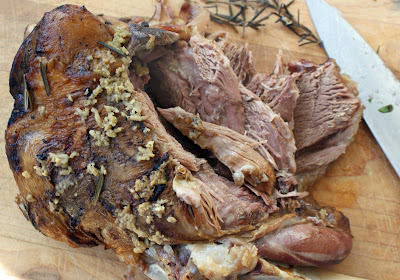 The lamb was fantastic. Perfectly cooked after 6 hours (not even, I think) – it fell off the bone but still had some tooth to it. The potatoes were intense, having absorbed all those lamby juices, and could have been easily roughly mashed (YUM) but we scooped them out, all deep golden and studded with softened cloves of garlic, and ate them alongside what was essentially pulled lamb. My mom and sister doused theirs in mint sauce. I want the leftovers wrapped in soft flatbread with tzatziki. For breakfast, maybe. 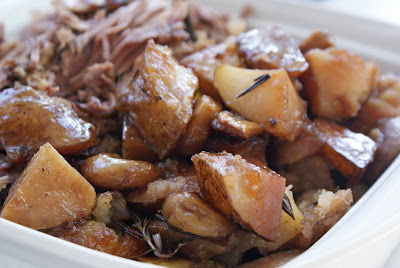 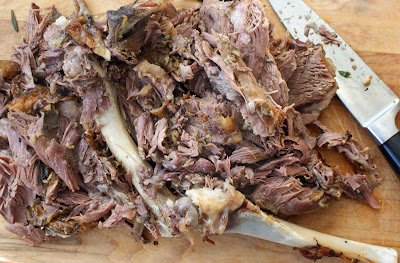 Leg of Lamb in the Slow Cooker with Garlic and Rosemary

olive or canola oil, for cooking

a few sprigs of rosemary

about a wineglass full of red wine

1Rub the oil all over the lamb and either brown it in a hot pan or throw it on the grill to get some colour. Meanwhile, toss all the potatoes and about half the garlic cloves into the bottom of your slow cooker.

2Put the lamb on top of the potatoes, squish a few more cloves of garlic and rub it over the surface, then sprinkle with salt. Toss in a few sprigs of rosemary and pour some wine in around the potatoes, cover (if the bone sticks out, cover the lid with foil to seal in the heat) and cook on low for 6-8 hours. Carve the lamb and serve with the potatoes, finished with a squeeze of lemon, if you like.

Maple (or Honey) Bran Waffles and Lunch at Local 201