Did you hear about the brutal storm that has been hammering the west coast for the past few days? Lucky for us we made it to Tofino before they cancelled ferries and flights – there have been plenty of Easter travellers stranded this weekend. My dad was one of them.

So I made some. Because I don’t have my old recipe with me I flipped through a few websites, then winged it – for my dad, I used half canola oil and half butter, and only half a cup of packed dark brown sugar (compared to the up to two cups I saw in some recipes) and truly -they were plenty sweet, moist and chewy, buttery without being greasy, heavy on the oats and raisins. You could, in fact, cut it back further – to 1/4 cup total (2 Tbsp. each butter and oil) – I’ll never make them any other way. 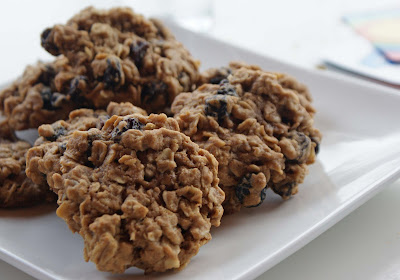 But- back to the story of my dad’s extended journey home. Have you ever seen Planes, Trains and Automobiles? He lived it last night, minus the loveable John Candy character. The bus broke down en route to Nanaimo; he managed to get a ($70) cab to the airport, where it was announced that his flight was cancelled. In line for some food when the call was made, he was at the end of the line to try to get on another flight. He managed to book one for this morning, so needed to find a hotel. He hopped on a shuttle and arrived at one just as he realized his checked bags were still at the airport. He went back to the airport as the highway closed due to a vehicle rollover. He eventually made it back to the hostel (did I mention it was a youth hostel?) and there were no rooms left – being the long weekend and a few hours after the ferries and flights had been cancelled.

He eventually got a room when someone happened to call and cancel theirs as he stood there with his bags.. but when he got to the room there was no alarm clock (nor wake-up service) to get him up early enough to catch his 6:30 am flight. He walked to find a store that sold alarm clocks and bought one, plus batteries. Last I spoke to him he had just arrived back to find there was no soap nor shampoo; he was heading out again on a quest for some.

And I thought all he’d need to survive the trip was a bag of cookies. 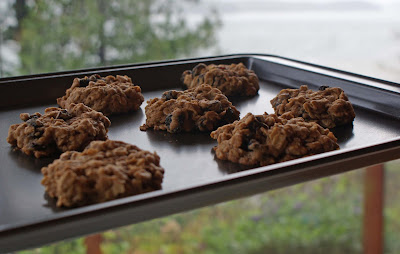