It was a long, hot day between the Stampede parade and hours on the grounds and midway today, and I’m just sitting down now to upload photos. I had another event tonight, arrived home after 9 and spent an hour of the remaining evening looking for the dog, whom I had forgotten I brought along for the ride on a coffee run (he was in the back of the car). A great use of time and energy, don’t you think? Even the neighbours came out and offered to help (likely in an attempt to get me and W to stop walking up and down the street shouting LOOOOOUIEEEEEE!)

And it’s about a thousand degrees outside, or perhaps I haven’t yet recovered from the +30 on the asphalt (which adds another 20, I’m sure) and so because this week of 5-5:30 am wake-ups has greatly reduced my brain function and made me prone to extreme run-on sentences, I’m going to put off the dozen or so photos of the day and tell you about a particularly spectacular salad we had a few days ago, that I completely forgot to report.

Which reminds me: my spinach is growing! It’s about a tenth of a centimetre across right now, but not bad when it began as seed – it’s an easy, cool-weather crop (it’s partly in the shade) that can be replanted as it’s harvested, providing a steady supply throughout the summer. Presuming of course one is on the ball about it. I predict mine will be at its peak around the time we arrive in Tofino.

But my sister, being far more regimented and scheduled and prone to planning ahead than me, planted hers in a timely manner, and it’s good to go. Also, Emily brought a bucket of eggs back from her Dad’s parents’ house out of town, where the chickens (the only names I remember are à la King and Salad Sandwich) were sent to live when the city told my sister she couldn’t keep them in Lakeview anymore. 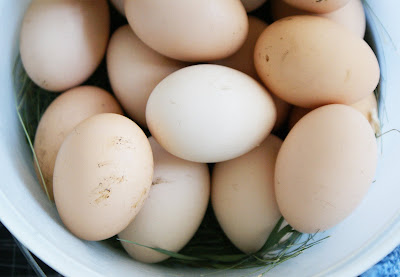 The combo of course smacks of a bacon and egg spinach salad. It would have been nice to sauté the spinach with some garlic and top it with an egg, or push it aside in the pan and crack the egg in to cook in the garlicky emerald oil (how Nigella did I just sound right there?) but when leaves are so baby-perfect I have a tough time wilting them.

So I cooked some bacon, and toasted some croutons, and made salads, and topped them this time with soft-boiled eggs instead of poached, which I love on a salad but can sometimes be watery. Regardless of how you cook them, there isn’t much better than runny yolk oozing out over greens, mingling with a balsamic vinaigrette. One Year Ago: Coconut Macaroon Bark