It would have made sense to post this recipe on the weekend, since this is what I made approximately a dozen batches of between Friday night and Sunday. I was on the kitchen stage all weekend, and this year the canola producers asked if I’d do a demo for them. I was happy to, since I tend to extol the virtues of canola oil while up there on my soapbox anyway. It really is great stuff.

They ran a recipe contest, and wanted me to make one of the winning recipes – a recipe called Saskatoon Bars. It turned out to be one of those great versatile recipes that come in such handy in summer, when depending on the week you might have rhubarb or apricots or blueberries or blackberries to use up. This makes a big batch of cookie-like bars that with the dough patted on the bottom (sounds like it’s getting a spanking) and then dropped on top, reminded me of a cobbler. So I renamed them Blueberry Cobbler Cookie Bars. It’s all in the branding, don’t you think?

And because the saskatoons aren’t quite ready yet, I used blueberries. Also, the original recipe called for almond extract, but I’m not a fan. It does pair well with blueberries or saskatoons though, so feel free to add it back in. 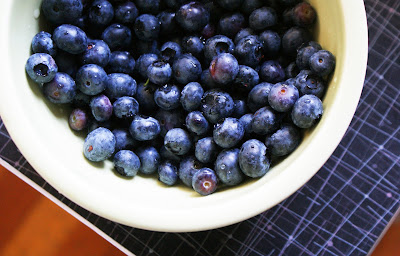 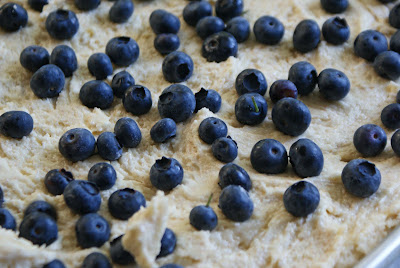 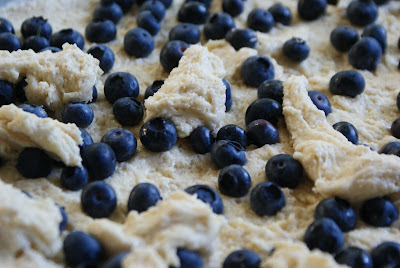 Adapted from the third place recipe submission (Saskatoon Bars) by Sharlene from Regina, Saskatchewan. Thanks to the folks at Canola Info for the recipe! If you like, whisk together a cup of icing sugar with a capful of vanilla or almond extract and a tablespoon or two of milk until you have a drizzling consistency, and drizzle the icing over the bars.

2In a large bowl, cream together canola oil, butter and sugar. Add eggs and vanilla and beat well. Add the flours and baking soda and stir just until the batter comes together.

3Spread 2/3 of the batter in the bottom of the pan. Sprinkle with berries or sliced fruit, then drop the remaining dough in spoonfuls over the fruit - it will spread as it bakes, and you don't need to cover it all.

4Bake for 30-40 minutes, until golden and springy to the touch.

Biscuits for a (Big) Crowd and Chili with a Fried Egg