Can you take another pie?

I remember my parents explaining to me why Christmas wouldn’t be special anymore if it came every day – it would just turn into the ordinary, into routine, and eventually we’d begin looking forward to something else. It seems this theory doesn’t apply to freshly baked pies. Especially when they arrive every day with ice cream.

It was Emily’s last day before heading back to school (her school has a modified schedule) and she wanted to spend her last afternoon making pie. (Not to suggest that baking a pie would take all afternoon – we did it during the 6 o’clock news.) E is a soccer star, and her season ended (at the provincials last weekend – yay E!), and there is now a month and a half before her indoor season begins. She decided to devote some of that time to baking. And making ice cream. Looks like I’d better take up jogging.

I let her choose what kind, while gently nudging her toward the stone fruits – nectarines, peaches, plums, cherries – she chose apple, but wanted to do something with the pint or so of raspberries she managed to forage in her back yard. We decided on apple-raspberry. 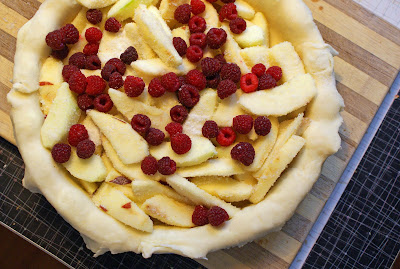 It didn’t take many raspberries – a cupful tossed over 6 or 7 apples did the trick. We carved slits in the top pastry to allow steam to escape. E’s Mom is a math teacher. 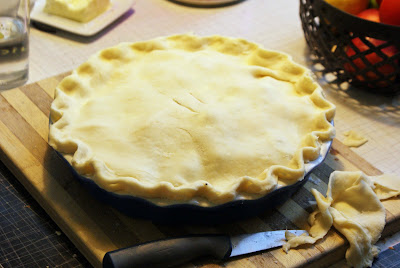 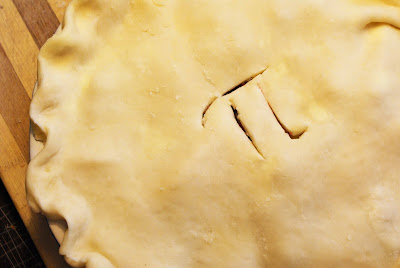 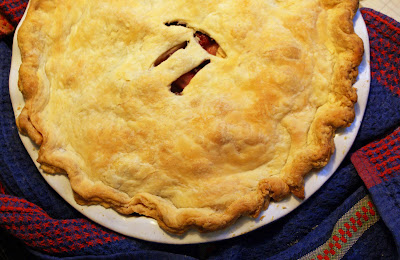 I love when something that wouldn’t have occurred to me if left to my own devices (and appetite) totally blows me away. The apple-raspberry combo was a perfect balance of sweet and tart, without worry of overjuiciness, which can be a risk in an all-raspberry pie. Also? It could very well come out tasting like pastry filled with hot jam.

What really did it for me (to me?) was the raspberry ice cream. Why is it that strawberry is such a primary flavour – right up there with chocolate and vanilla – while raspberries are completely neglected? Raspberries, unless you are lucky enough to acquire the very best strawberries, have more flavour and punch – we mashed them up, and stirred them into almost-frozen sweetened cream. I don’t think I can buy ice cream from the grocery store anymore. I may officially be spoiled.

I had made a double batch of pastry yesterday – the recipe from The Harrow Fair Cookbook. All my life I’ve spurned the idea of egg and vinegar in my pastry – I think I may be reformed. The recipe works perfectly. (I did use less salt and only 1 tsp. vinegar, which I doubt makes much difference.) Click on this photo – check out those flakes! (Here’s one of those instances where having flakes isn’t totally mortifying.) Which is not to say flakes like this cannot be achieved with flour-butter-lard-water alone. I’m just saying. 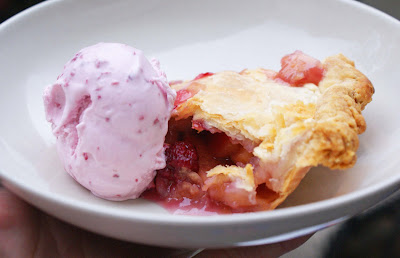 Peaches – Under a Cake and in a Pie