Are you sitting down? Because I have some news that just might change your life. I think it may have changed mine. Or at least my mornings. And that’s something.

All this time I thought that granola was something you made in Very Large Batches, to portion out into glass jars and ziplock bags for storage. Turns out you can make a quick batch in a skillet, just like jam, and it takes approximately five minutes. You can make enough to last the week, or a day if you have lots of granola lovers in your house, and you can eat it warm, straight from the pan. And this granola I’m talking about? Costs hardly anything. And it’s fantastic.

I wouldn’t have thought of it. But today I grabbed a magazine off the stack in the corner – the one almost as tall as me that Mike warns one day will just suddenly wind up in recycling – and flipped through it, and saw this. I ditched some of the butter (the granola I typically make doesn’t even have any) and added some hemp seeds, just because I had them. Theoretically you could make this with any combination of oats, nuts and seeds, and even add raisins or other dried fruit at the end, just like I did. But the plain old combination of oats and seeds with a handful of raisins at the end was surprisingly yummy.

So I made this – I made granola – while they boys sat at the kitchen table doing whatever it is they do, and my granola from scratch was done faster than a pot of oatmeal would have been. See? Totally life (or at least breakfast) changing. 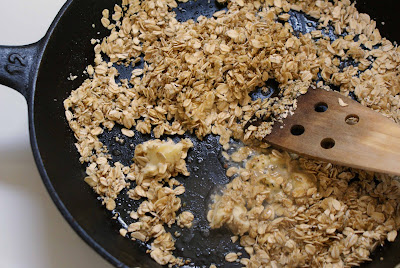 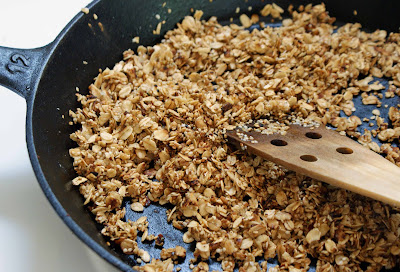 adapted from the June 2001 issue of Gourmet

2 Tbsp. honey or golden syrup (such as Roger's or Lyle's)

a shake of cinnamon

a pinch of salt (optional)

a handful of raisins or dried fruit (optional)

1Put everything into a large, heavy skillet (cast iron is perfect) set over medium-high heat. Cook, stirring often, for about 5 minutes, or until the granola is well coated and golden. Set aside to cool and stir in raisins or dried fruit.

I was going to wait for fall to bring back Free Stuff Fridays with a flourish, but this granola calls for the brand new cast iron pan I bought just to give away to one of you. If you hang around here on a semi-regular basis you know what a fan I am of cast iron, and I think everyone should have one on their stovetop. This is a true cast iron, not a newfangled pre-seasoned one, which are far better if you can commit that little bit of extra effort to get it going. I’ll walk you through it. I sense a cast iron PSA coming up…

I also just can’t wait to hear what you’ve all been cooking. Don’t limit your answers to dinner last night (unless it was something particularly worthy of reporting) – what has been the most delicious thing you’ve eaten over the summer? Where have you found inspiration? What else is up in your world? As always I’ll make a random draw from all the comments next Tuesday.