He was so ready for it – it was as if he had been going to school for years and knew the drill – did I tell you about the Ramsay school spring concert we were invited to, at which halfway through the show W stood up from his spot in the audience and not-so-subtly joined the kids’ performance, finished it with them and filed off with the kindergarten class? Totally ready for it. No tears or leg-clinging or even really noticing that we were there at the back of the auditorium and then at his new classroom, where he quickly found his hook and place on the mat and was perfectly self-sufficient thank you very much. Bye now. 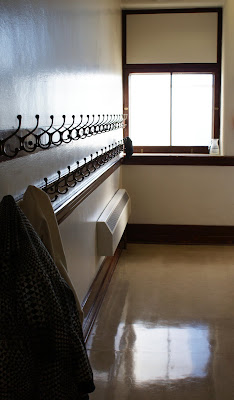 And then a mass of parents descended on Caffe Rosso for celebratory lattes and muffins, and I got some work done in a quiet and peaceful house, and when I walked back at lunchtime in the brilliant sun and over the few first leaves that have already decided to abandon their trees, I blew the idyllic-ness of it all by getting the pick-up time wrong and having to collect W from the principal’s office. Which means I’ve already made the first impression as that parent. It also means I need to make some pretty kick-ass cookies tonight to bring to his teachers and the front office secretary tomorrow morning to ensure this reputation doesn’t stick for the next 7 years. If I bake enough, maybe I can make them forget, and then become that parent? Can a school faux pas be corrected with cookies?

After school we went out to see Darrel and Corinne at Winter’s turkey farm. Could this guy be any cuter? And the kid holding him? 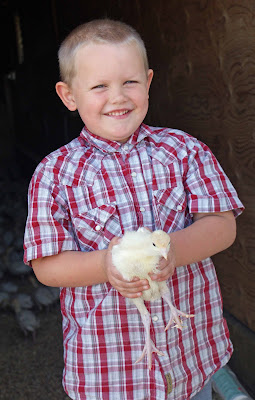 Even cuter: W insisted that we switch and I hold the three-week old turkey so he could take a picture of him. And then made me find the setting on the camera that plays back the photos for you so that he could show the turkey the photo of itself. Which it turned a googled eye sideways at. 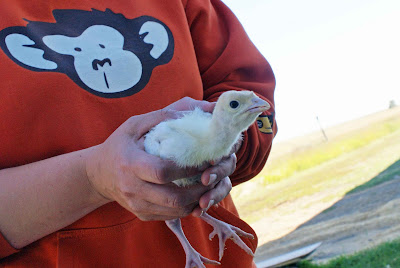 We wrapped our day up with Chuck Hughes – he was in town today and let a few of us bring our kids to hang out and make sandwiches with him. He was such a great guy. And hilarious. And completely and genuinely interested in everything the kids had to do and say, even the stuff about dragon slaying. W made him laugh, too. It was a blast. 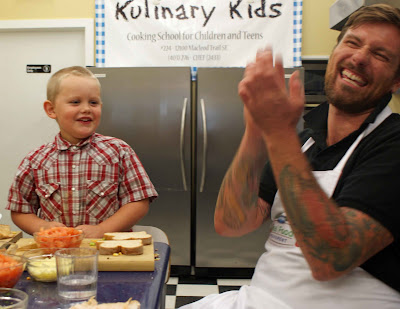 Which brings me to the confession that I don’t in fact have a recipe to share, since I haven’t managed to set foot in the kitchen today since pancakes this morning. I’ll be back with some penance-inspired cookies tomorrow.