Again taking a stab at a new use for the proliferation of chard out back. Pizza! Shazam. I figure this takes care of both my slightly obsessive desire for pizza and obligation to eat some greens. (The boys didn’t get why I would do such a thing to an innocent pizza, and ate pita pizzas instead.)

I saw it here. But I couldn’t bring myself to boil the poor freshly-plucked chard – instead I roughly chopped, then sauteed it in a slick of oil and whack of crushed garlic until it wilted down to almost nothing, scattered grated mozzarella over rolled-out pizza dough (on a cornmeal-dusted baking sheet), topped it with the chard and crumbled goat cheese and took their advice to drizzle it with garlicky oil (squish a clove of garlic into a small dish of oil and let it sit a bit) and baked it at 450°F for about 20 minutes, until it was golden and fantastic.

The goat-cheese-and-chard-ness of it makes it sound a little shi shi lala, don’t you think? It’s sufficiently unsloppy enough to serve in small fingers for a cocktail party, if you’re into that sort of thing. Serve it straight from the cutting board. Rustic-chic, no? 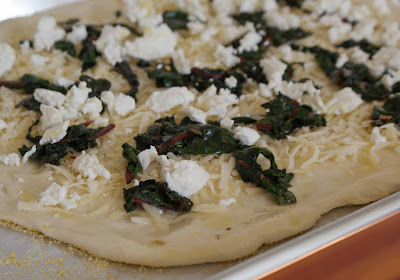 11 comments on “Pizza Bianca with Goat Cheese and Chard”