Like so many, I went to bed last night watching crews rescue trapped miners in Chile. This morning when my alarm clicked on, the first sound that came over the radio was news that half of the men had been successfully extracted. I was inspired to dig up a Chilean recipe – relating in the best way I know by making a stew similar to what those men may be going home to eat with their families, and sitting down to eat it with my own. 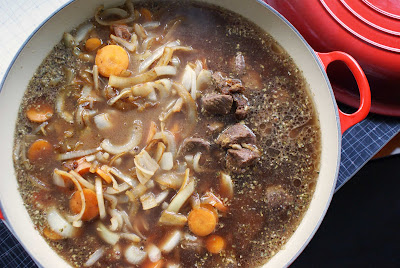 Also – I’d like to introduce a new family member, a 4.7 L red braiser I brought home from the Le Creuset store last week. (No, they didn’t give it to me – I wish – I didn’t get a deal nor was I coerced into reporting back here. I just decided that I deserved a Le Creuset, dammit, and I went and bought myself one, right after purchasing the fanciest and most expensive coffee I could find at Phil & Sebastien. I needed a little retail therapy.) If you haven’t heard the news, we now have the only stand-alone Le Creuset store in Canada, in the new part of Chinook mall. It will allow you the experience of being a kid in a candy store all over again. A kid who doesn’t get nearly enough allowance to buy all the mojos she wants.

This stew was a great way to break it in. (I must say though, I’m surprised that the handle can only tolerate temperatures up to 375F. I really don’t want to have to go and replace the handle when I just bought the thing. Staub cookware, also made in France, has handles made of nickled steel or brass that can take temps up to 500F.) 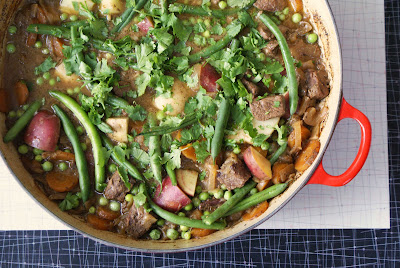 This has slow-cooker potential, but I wanted to do it in a pot, like they would in Chile. I braised the meat in the oven rather than simmer on the stovetop for an hour, as instructed (I’m a bit of a culinary rebel) and used a small roast I had in the freezer from Buffalo Horn Ranch, which I diced and browned and which tasted surprisingly like flank steak, I think. Or perhaps I’m just having flashbacks of the flank steak stew of my childhood.

After braising the meat with the onions and carrots, you add the potatoes and green beans and peas, which you don’t want to cook to death, and finish them off. And top off the lot with a poached egg. Once the egg parts of our dinners were gone, my sister went and got the sour cream and lobbed on some of that, and was it ever a Good Idea. Chilean Hangover Stew, meet Beef Stroganoff. 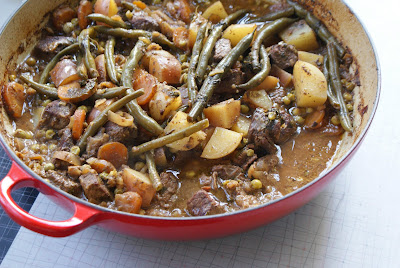 This is called Hangover Stew because it’s often served on Mondays as a means of using up the leftovers from the Sunday barbecue – it’s a dish served all over Chile. This version is adapted from Saveur, issue #14 – of their adaptation of the version at Raquel Orellana’s Restaurante En Familia in San Fernando, Chile. 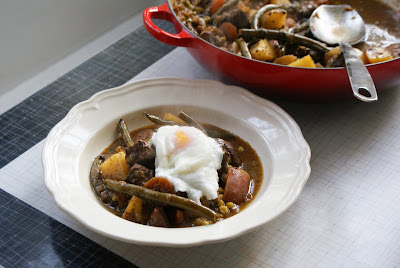