Or the lazy. Or those who aren’t at all lazy but would much prefer a nap.

In case you haven’t noticed, cake pops are the sweet of the moment, made popular by Bakerella, blogger extraordinaire, who has now published an entire book of them.

They are baked cakes, crumbled and mixed with icing, then rolled into balls, frozen, impaled on a stick and dipped in chocolate. I say this as a lover of frosting and one known to finish the leftover frosting on other peoples’ plates: the thought doesn’t appeal. (No offense Bakerella – I really think you’re great and the pops are adorable. They just make my teeth ache.)

It occurred to me that one could forgo the baking, crumbling, mixing, shaping and freezing (not that, as you know, I’m against spending time in the kitchen) and move straight to the aesthetic part of the cake pop by cheating with cake pop implants: Timbits. 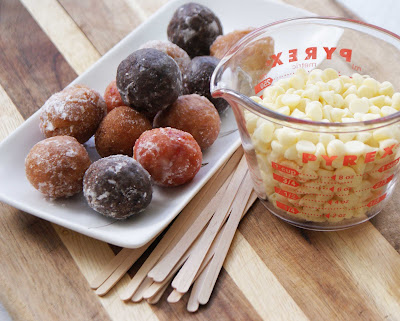 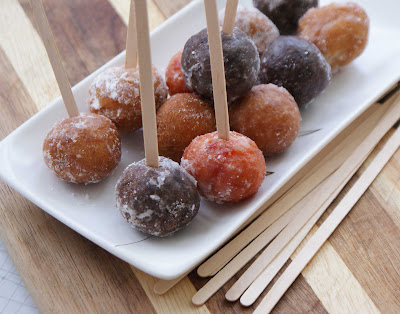 1) Buy cake-doughnut Timbits.
2) Impale on sticks (lollipop sticks from Michael’s or another craft store, or wood coffee stirrers).
3) Melt chocolate – any kind – and dip them in.
4) Let them sit on a plate or piece of waxed paper or foil until set. If you like, sprinkle with coconut, coarse sugar or sprinkles. 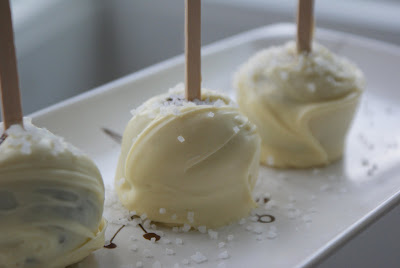 Admittedly, they are about as sweet as anything I’ve eaten. But the Timbits shave some time off the process – and aren’t cake pops mostly about cuteness?

20 comments on “Cake Pops for Cheaters”