All this talk of the Okanagan (have you heard? we’re giving away a trip!) reminded me of my trip out to Kelowna in October that I’m pretty sure I completely forgot to tell you about. I went to tour some orchards that are a part of the BC Tree Fruit co-operative (owned by 800-plus BC growers), and spent the day tooling around orchards, past wineries, wondering why I don’t hop on a plane for the 45 minute flight more often.

Among the people I met that day were Sally and Wilfrid Mennel, certified organic farmers for over 30 years and the couple who discovered the Ambrosia apple about twenty years ago, right there among rows of Jonagold trees in their orchard in the Similkameen valley. “In so far as I’m somewhat negligent in my weeding, it survived,” Wilfred told me. We must be kindred spirits, except that most of the time I’m negligent with my weeding because I have no idea what’s weed and what’s not, and don’t want to accidentally cull the good stuff. Also, I don’t like bending over and risking plumber butt for the neighbours. 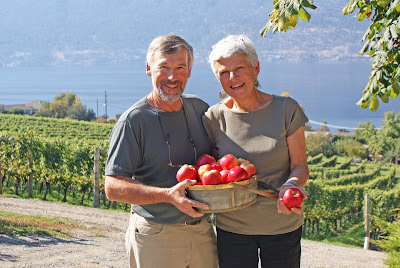 Anyway. As you can imagine it’s a rare occurrence for an entirely new fruit to just sprout – and survive – on its own. McIntosh apples showed up in Ontario back in 1810, and Granny Smiths were discovered in Australia in 1868, but generally new varieties are developed by horticulturalists, many of whom spend their careers attempting to create new apples with little success. And then Sally and Wilfrid just go and find one, literally in their own back yard.

They let it grow, and after a couple years the small sapling began to bear fruit. The apples it produced were fine, crisp and sweet, with a honeyed flavour and aroma – Wilfred named it Ambrosia – food of the gods. Once the existing tree had matured, they took a few scions – twigs with buds intact – and grafted them to new root stock to see if they could grow more of the apples. Friends and neighbours began planting new trees in orchards around the Okanagan to ensure they would grow in varied conditions. The trees thrived, and so the Mennels took on the task of introducing a new and completely unknown variety of apple into a world of Spartans, Gala and Red Delicious. 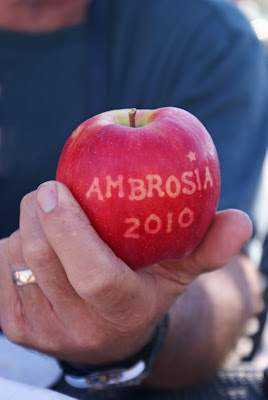 Ambrosias are low in acidity and slow to oxidize, meaning that once sliced the apples hardly turn brown. I came home on the plane last night with a bagful of them, freshly picked, and started slicing them up for W’s kindergarten snacks – their colour hardly turned over the course of the morning. In the kitchen an Ambrosia can take the heat, holding its shape in pies and other baked goods. The coolest part – it’s still a complete mystery where they came from – the Mennels’ best guess is that a nearby Golden Delicious had something to do with it. But this season, BC Tree Fruit expects to sell just under 15 million pounds of truly Canadian Ambrosia apples, all grown on trees with the same parentage – what Sally and Wilfrid call their chance seedling.

Don’t you just want to read that story to your kids before bed? 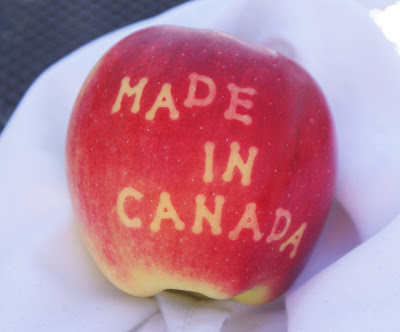 (They put the words on the apples by putting letter stickers on them while out in the orchard, still growing, before they turned red. Cool huh? Tattooed apples!) 1-2 tart, firm apples, such as Ambrosias, or ripe but firm pears

enough milk or water to make a thin batter

2Slice your apples (unpeeled) into rings about 1/4" thick and cut out the cores from the middle, making a ring. In a medium bowl, whisk together the flour, cornstarch, baking soda and enough milk or water to make a thin batter – it should have the consistency of thin cream.

3In a wide pot, heat an inch or two of canola oil over medium-high heat until hot but not smoking. (You’ll know it’s ready when a scrap of bread held into the oil bubbles around it.) Dip a few slices of apple at a time into the batter, coating them completely, then gently slip into the oil. Cook a couple at a time for a minute or two, flipping with tongs as necessary, until golden. (If they are cooking too quickly, turn the heat down – if it’s taking too long, the oil may need to be hotter. Don’t crowd the pot, or it will bring the temperature of the oil down.)

4Remove with a slotted spoon and transfer to paper towels to drain. Once cool enough to handle and eat, sprinkle lightly with powdered sugar.