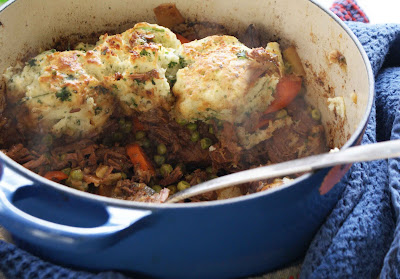 I practically got a standing ovation for this last night, even though I called en route home and asked Mike to pop it from fridge to stovetop and didn’t suggest he check the level of liquid inside, and then I didn’t either, and by the time the biscuits had cooked through it was starting to burn on the bottom.

To be a true Irish stew this would have to be made with chunks of lamb, which you could use just as easily and without having to change anything – bison would do well, too. In keeping with the beer theme of St. Patrick’s Day tomorrow, you could make this with stout – a nice dark Wild Rose Oatmeal Stout, or Guinness – but more stock would work just as well. Mushrooms would do well in this, too. The dumplings are simple – they’re just cream biscuits, scooped (I used a little ice cream scoop with a lever, which was oh-so-satisfying) onto the top of the simmering stock. They will steam through with the lid on, but if you want them golden, take the lid off and run it under the broiler for a few minutes. It’s amazing what a golden crust does for the appeal of a biscuit.

1In a large, heavy pot, brown the meat in a drizzle of oil in batches (without crowding) over medium-high heat. Transfer to a bowl and cook the onions in the same pot. Pour in the stout or stock and bring to a simmer, scraping up the browned bits on the bottom of the pan. Return the meat to the pot, cover and put into a 300F oven for 2 1/2-3 hours.

2Remove from the oven and add the stock along with the potatoes and carrots, cover and cook on medium-high on the stovetop for another 20-30 minutes. Meanwhile, make the dumpling dough: in a medium bowl, stir together the flour, parsley, sugar, baking powder and salt. Add the cream and stir just until the dough comes together. Drop the biscuit batter by the large spoonful on top of the simmering stew, cover and cook for 15 minutes, until the biscuits are cooked through. If you like, put the pot under the broiler for a few minutes to allow them to brown.