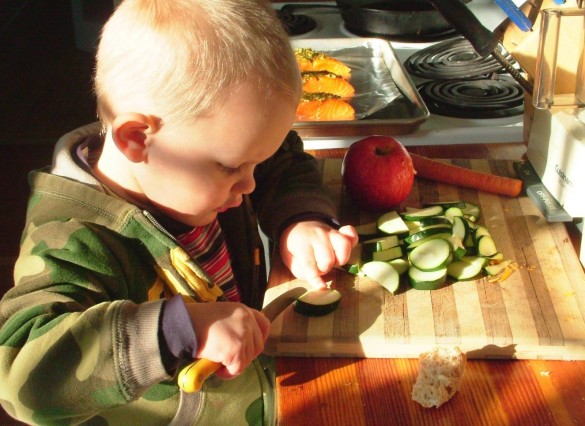 Today I was asked to come cook at an organic wine festival at Willow Park, so the boys were left to their own devices. Luckily, last night I found myself with a chopped zucchini (more action for yesterday’s TV camera) that needed to be used before it withered. I let W practice his chopping with it – zucchini are perfect for this, being nice and soft, but not rolly like a mushroom. Yes, I realize I posted a photo of my 2 year old using a knife, and not even a plastic one. He knows the difference, and won’t be duped by plastic. He wants to use the big chef’s knife, so this isn’t a bad compromise. I’m right there beside him, watching his little fingers (isn’t it cute the way he holds the zucchini slice in place with his index finger?) so that they don’t make it into the sauce. Plus, he’s actually eating raw zucchini, taking an interest in preparing dinner, and learning knife skills. So I think the benefits outweigh any potential danger, don’t you?

All we did was saute up the zucchini, a red pepper that was also starting to go wrinkly, and a handful of mushrooms in a drizzle of canola oil with a few smashed cloves of garlic. (This was all being done in the 10 minutes that the salmon took to cook.) I poured over a can of tomato sauce, it simmered while we ate and when it cooled, I put it in a yogurt container in the fridge in case of emergency. The great thing about chunky pasta sauces is that they balance chunky pastas well, which are much less messy for W to eat. Also, I think chunky pastas (like rotini, penne, etc.) are better in tweed (whole wheat) than spaghetti. (Brown rice pasta is a good alternative if you want to maintain that smooth mouthfeel.)

Day 76: Inglewood Pizza (and 11 reasons you should try quinoa)