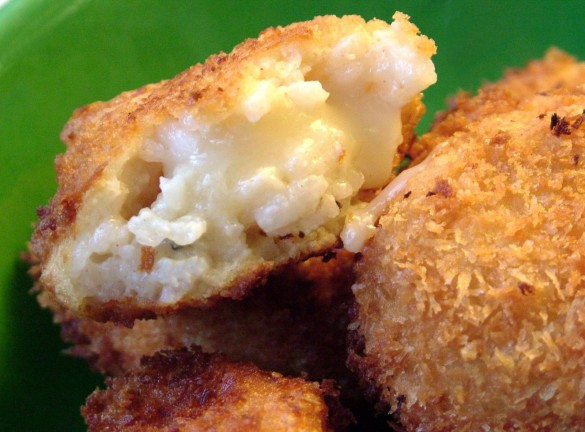 Once again I realize this sounds awfully haughty for a regular Monday night, but there were a few leftovers from a Grey Goose event with Dimitri Lezinska (here from Paris) I was cooking for over the dinner hour at Willow Park. Mike was never so glad to see me come home.

I’ve made risotto before. I’m a fan, but not devoted to the stuff; to be honest, every time I have risotto it’s just a little too much. Too starchy, too heavy, too dense. This coming from someone who could eat an entire loaf of bread with butter with absolutely no problem. Risotto is the only thing I can think of that puts me over the edge. Perhaps because restaurants tend to serve big bowls of it on its own – why is that?

But I have always wanted to make arancini – shallow-fried balls or patties of cold risotto, moulded around a chunk of mozzarella and dipped in egg and panko before frying. You just get a few bites of risotto (enforcable portion control – probably the key to enjoying the stuff), with a crispy exterior and creamy, cheesy middle. To be honest, I’ve never attempted arancini because it seemed like too much work to have to make a recipe (risotto) in preparation for another recipe (arancini).

Was I ever wrong. If you’ve never made risotto, you should give it a whirl; it’s one of those recipes that sounds fussy, but is in reality one of the toughest to screw up. It’s easier than steaming fluffy white rice. Seriously. You want it to get starchy and creamy. If you add too much liquid, you just cook it until it absorbs it. If there isn’t enough, pour in more. Stir it as much as you can – not necessarily constantly – until it’s done. It’s like making oatmeal. And if you cool it down and put it in the fridge it will congeal into this mass that can be rolled into balls with no effort. Heat about an inch of canola oil in a skillet on the stovetop, and if you don’t have panko, you can simply dip them in flour and fry them straight away, and they are every bit as good, if not quite as crunchy and impressive-looking. But we all know looks aren’t everything. Use any kind of risotto; I made a basic lemon and Parmesan version. Perhaps too lemony? I used less than the recipe requested, but really that sort of thing is a matter of taste. Chill overnight, or up to a few days. When you’re ready to make arancini, cut some mozzarella into small (about 1/2″) cubes and shape a couple tablespoonsful of the risotto into a ball around it. I like flattening them a little into patties – this makes them easier to cook evenly all the way through, and you don’t need your oil to be quite as deep. While your canola oil is heating in a heavy skillet or shallow pot (enough to come almost halfway up the side of the risotto cakes) beat a couple eggs in a shallow bowl, and some Panko (crispy Japanese breadcrumbs) or dry breadcrumbs in another bowl. If you like, put a bit of flour in a third. When the oil is hot but not smoking (it should sizzle around a bit of bread dropped in), dredge the risotto cakes first in flour, then in egg and Panko (or skip the flour, or just do flour), and gently drop them a few at a time into the oil. (Don’t crowd the pan, or it will cool the oil down too much.) Cook until golden on one side, then flip and cook on the other. If you’re concerned that the inner chunk of cheese won’t be sufficiently melty, put them on a cookie sheet in a 350 degree oven for 10 minutes or so; this is also a great way to keep the first ones warm while you cook the rest. For the Ponzu Sauce:

Preheat the oven to 500F. Rub all sides of the beef with the oil and sprinkle with the pepper. Place in a small roasting pan and cook for about 10 minutes, then reduce the temperature to about 400F and cook for another 15 minutes, until the internal temperature reaches 120 degrees F. Set aside to cool.

In a bowl or heavy-duty resealable plastic bag large enough to hold the beef, combine the soy sauce, sherry, green onions, garlic, and lemon zest. As soon as the beef is cool enough to handle, transfer to the bag or bowl and refrigerate for at least 6 hours and up to 24 hours, turning over occasionally.

In a bowl, whisk together the soy sauce, vinegar, sugar, lemon and lime juices, and ginger juice to make the Ponzu sauce, whisking until the sugar dissolves.

About 45 minutes before you plan to serve, place the beef in the freezer (this will firm the beef and make it easier to cut even slices). After 20 minutes, remove the beef from the bag and discard the marinade. Slice crosswise with a very sharp knife into 1/4 inch slices. Fan the slices, overlapping, on a platter and let stand for 10 minutes. If you like, peel a daikon and then keep slicing off thin ribbons with the vegetable peeler, and use the daikon ribbons to garnish the beef. Drizzle with the Ponzu sauce and serve. (Alternatively, you could divide everything among soup spoons, as illustrated in the photo.)