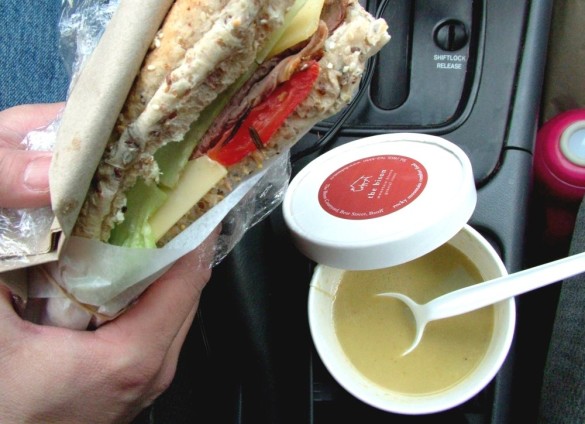 I promised I’d take Ben and Willem to see Horton Hears a Who this week, and because it’s Easter break week and snowy and every kid in Calgary seems to love hanging out at the mall, I figured the 5pm show might be the least jammed. (It was nearly empty – phew.)

Of course, my plan landed us there right at dinnertime. We shared a popcorn, and ate pears in the car on the way home. (I have to say, I’m slightly irked that popcorn is now promoted as “whole grain”, which of course it is since corn is technically a grain, but implies that buying a tub of movie popcorn is somehow a healthy choice.) What last resembled a meal we ate mid-afternoon in the car on the way home from Banff; I picked up two sandwiches from The Bison General Store: Piri Piri Roast Bison & Appenzeller w/ Horseradish Butter, Shaved Onions, Watercress and Oven Dried Tomatoes ($9.25) and Valbella Maple Pepper Ham & Brie w/ Pea Shoots, Fresh Tomatoes and Grainy Mustard Mayo ($8.25), both on humongous sections of crusty, grainy baguette. Pricey but tasty, not quite earth-shattering, but refreshingly real for road food. When I heard some customers discussing the roasted cauliflower, fennel and goat cheese soup, I couldn’t leave without a cup, even though I’m not much of a fennel fan. It was much closer to earth-shattering. And easy to sip out of the cup while driving, actually, as if it were a coffee. Not that I’m condoning eating while driving, of course. Ahem.

We passed the sandwiches around, and whenever W had his turn he spent it picking the meat and cheese out of the baguette and eating it. But I quite enjoyed my pea shoot sandwich, actually. 6 comments on “Day 87: Popcorn and pears (having already eaten sandwiches from The Bison General Store)”