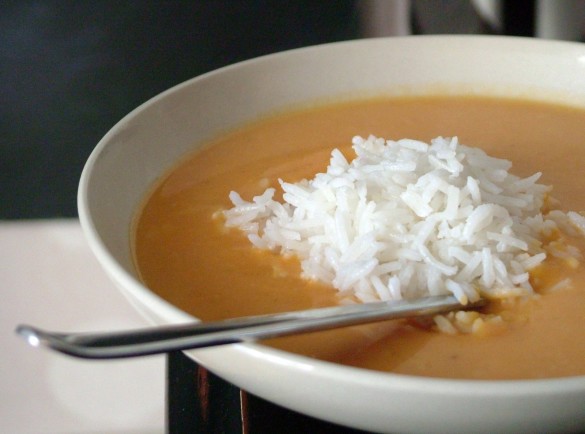 There’s nothing wrong with reheated leftover mashed sweet potatoes. Until you’ve been eating them for 3 days and hardly make a dent in them. I decided they needed to be transformed into something else.

Fortunately, one of the jars on my shelf contains tiny orange lentils, which I hardly ever use but reminded me of the soup I made way back on day 2. So I chopped and sautéed the usual onion-garlic-ginger trio in a little canola oil until it smelled nice, then threw in a small spoonful of curry paste, two handfuls of lentils, a 1L tetra pack of chicken stock and a little extra water, and let it simmer. (The great thing about lentils, besides the fact that they are so good for you, is that you don’t need to pre-soak them like you do other dried legumes.) When they were soft, I scraped the last of the mashed sweet potatoes into the pot, warmed it through and blended it all, right in the pot on the stove, with my hand-held immersion blender. (I’m not the gadgety type, but this is one of the kitchen tools I could not happily live without. I don’t have the patience to transfer hot soup in batches to my blender in order to puree it.)

I wasn’t going to add any coconut milk. It was good on its own. But it needed thinning, and I couldn’t stop imagining how well it would take to some creamy coconut milk. I settled on half a can of light coconut milk, with a drop of coconut extract to boost flavor without adding any more saturated fat. The soup was tasty, but not quite enough for dinner. Besides, when I cleaned out my freezer yesterday I pulled out a pork tenderloin to thaw, committing myself to do something with it. I haven’t made chipotle pork peanut chili recently, and had also enearthed a few chipotles in a baggie in the freezer (you never use an entire can at once).

I would probably not have called this chili had I come up with it completely on my own. One might argue that this isn’t really chili because it doesn’t contain beans, and I suppose they’d be right. But it was inspired by the Georgia chili in Jane & Michael Stern’s classic cookbook Chili Nation, which doesn’t have beans either, and it still made the cut. Who am I to argue with Jane and Michael?

You start by browning a pork tenderloin, finish it in the oven (browning adds flavor and a crunchy, caramelized exterior), then slice it and stir it into a peanutty tomato sauce that is meanwhile simmering on the stove. (For some reason the spicy peanuttyness of it reminds me of the swimming rama we used to order at Thai Away Home in Vancouver.) Serve it with a spoonful of rice, and dinner’s done in under half an hour. As I was about to make a little pot of basmati rice I remembered the half can of coconut milk leftover from the soup. Perfect! A cup of rice to a cup of coconut milk and a cup of water, and we had coconut rice that, it turns out, was delicious piled into a bowl with the soup ladled overtop. I ended up eating that for dinner, and then a few slices of pork, retrieved straight from the pot with a fork.