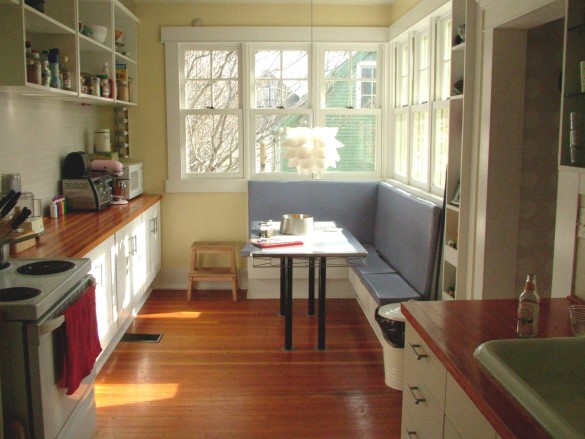 I had a request a few weeks ago to post a photo of my kitchen, so that readers could get an idea of the space this blog is really all about. Since then I have been waiting for a moment during which my kitchen is spanking clean to take a photo. Since it hasn’t happened yet, I finally got over myself, gave the counters a wipe and just took some.

I really love my kitchen. It has a nook/booth (nooth?) and lots of sunny windows, which in the summer open up to the patio, so I can cook while people sit outside and chat. It has old countertops salvaged from the UofC science lab (who knows what has been dissected and exploded on them before they even reached me?) and a really cool sink that fills up fast, always looks dirty and drips constantly, but I don’t care. I had always envisioned myself in a sunny kitchen with lots of windows and a big white porcelain sink. Usually I was baking pies for my husband John (Cusack) and had a 29 inch waist, but this will do.

I made a quick frittata for breakfast/lunch this morning – quickly sautéed the last chunk of purple onion (from the Greek salad), a few sliced mushrooms and a chopped tomato until the moisture cooked off and the veggies started to brown. Then I tossed in a handful of spinach, cooked it until it wilted, and poured over 4 whisked eggs. When the whole thing was close to set, I sprinkled it with grated cheddar and ran it under the broiler for a minute to melt the cheese. Leftover wedges make great sandwiches served on toast or open-faced on half a bagel, but since I had neither I wrapped it in half a whole wheat flour tortilla. Mike is in Edmonton tonight, so W and I grazed on this, some leftover chicken, and the last of the brown and wild rice salad. (I should mention here, if I haven’t before, that wraps are not the low-carb, low-calorie bread option they are often made out to be. I’m not sure who started this trend, but a wrap is simply unleavened bread. Imagine if yeast had been added, it would be the same thickness as a slice of bread, but just as large in diameter. Or conversely imagine rolling a slice of bread with a rolling pin until it flattens to the thickness of a wrap. No fewer carbs or calories in it.)