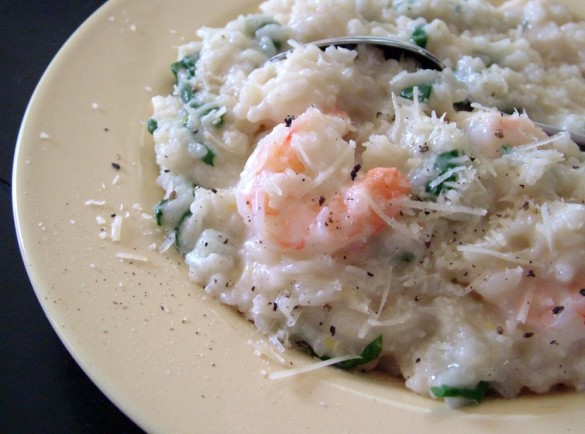 I had to go to the Jully Black concert tonight, so wanted to ensure our houseguests were properly subdued on the couch before I left, so that I didn’t miss anything. Remembering how easy it is to make risotto, and with a bag of near-wilted spinach in the fridge, I thought I’d stir up a pot. Their reaction: “risotto?!! That’s so hard to make!” Not really – it requires about the same level of skill as making oatmeal, only you use rice and stock. You don’t need to attend to it religiously; contrary to popular belief, you can walk away from it once in awhile. And it takes on all sorts of additions beautifully.

So I made the same lemon Parmesan risotto I’ve made before, stirring in a few handfuls of torn spinach after the cheese, and then threw in some thawed frozen raw tail-on shrimp, stirred them into the hot risotto and put the lid on the pot until they turned pink. Finish it with the juice of a lemon, and that’s it.

Unfortunately, I forgot that R is allergic to shrimp. (I’m not the greatest host.)As we stood by the pot and stirred, we daydreamed all sorts of risotto possibilities, including a sweet version with caramelized pears and mascarpone, and another with crumbled blue cheese, swirled through so that it only partially melts, served with thinly sliced steak on top. After the concert, I came home and we assembled the pavlova we made yesterday but were too full to eat. A big one this time, that we cut into crunchy wedges that were filled with sweet whipped cream and topped, again, with tangy passionfruit. (I know, once I do something that works so well, I tend to repeat myself.) And because passionfruit isn’t all that common, people are always interested in trying it out, even though the insides look like something that might be used in a low-budget sci-fi movie.

R summed up the passionfruit perfectly: “it looks like you killed it by cutting it open.”