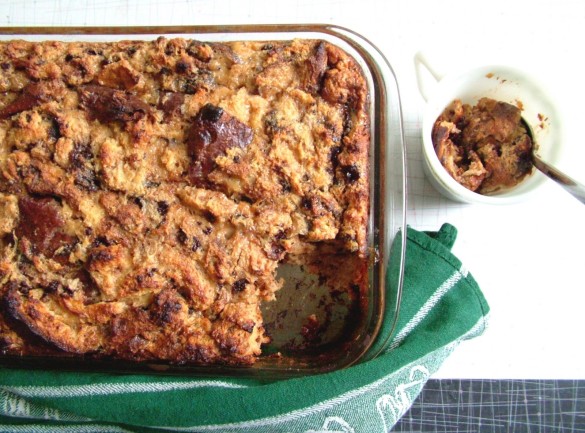 Tonight we ate dinner standing up around the stove, picking at the leftover roast chicken, some sliced apples, and some fish sticks K & N brought over for the kids. We weren’t all that hungry; late in the afternoon we had tea and I baked a bread pudding to send home with K, who came over to help me navigate the control panels of my websites. Why bread pudding? Awhile ago, N picked up one of those giant Italian loaves, the kind that come in a fabric bag tied with Christmassy looking fake twigs, and since then had the best intentions to do something with it. (Last time it was a panettone, which they sliced and turned into Italian toast for brunch. French toast, really, but you can’t call egg-dipped Italian bread French.) It sat in her living room for weeks, and finally over the weekend I came home to discover it hanging from our doorknob.

This one was coffee-scented with chocolate chips and this oddly sweet coffee goo in the middle. I cringed at the thought that it had a) come all the way from Italy, and b) sat in her living room for an extended period of time, and yet c) was still soft as a baby’s bum. Regardless, it needed to be used up, lest it turn into a doorstop or sit on the counter to be picked at for days on end. The obvious solution, since Sunday brunch is too far away, was bread pudding. When it came out of the oven it was too warm and heavenly smelling to resist dipping a spoon into.

I cringe again at the thought of posting a recipe that is essentially bread, sugar and cream, but if you’re a fan of bread pudding (I don’t understand how it’s possible to not be? Everyone loves French toast, and bread pudding is one better) this is a great basic recipe that you can do plenty of things with. I made giant pansful for an event with 200+ people in attendance and cut it cold into squares that everyone ate with their fingers, and it was a huge hit. Since it was a Spanish wine festival, I added raisins that had been soaked in Spanish brandy.

I’m sure not many of you will encounter the problem of having to dispose of a giant Italian bread, so I’ll offer up a good basic bread pudding recipe that is fantastic as is or can take on any number of aliases. Cut or tear the bread into 1” chunks in a large bowl. In another bowl, whisk together the eggs, honey, milk, cream and vanilla. Pour over the bread and let sit for a couple hours, stirring gently once in awhile.

Preheat oven to 400°F. Pour the bread mixture into a 9”x13” pan that has been sprayed with nonstick spray, or any baking dish that will accommodate the quantity you made.

Bake for an hour or so, until puffed, golden and set. Serve warm or at room temperature.

Other things you can do to it:

Apple Raisin Bread Pudding: Use raisin bread, and add a grated apple and shake of cinnamon to the egg-milk mixture.

Coffee-Chocolate Bread Pudding: If you don’t have a giant coffee-chocolate loaf, try spiking the milk with a tablespoon of instant coffee, and scatter some chocolate chips into the bread mixture (spread half into the pan, sprinkle with chips and top with the rest of the bread mixture, so that they don’t sink to the bottom),

Chocolate-Orange Bread Pudding: Same as above, but add the grated zest of an orange instead of the coffee.

Caramel Bread Pudding (with or without bourbon): Add a cup of caramel sauce to the egg-milk mixture instead of the sugar. If you like, add a couple tablespoons of bourbon or rum, too.

Pumpkin Bread Pudding: Add a 14 oz. can of pumpkin to the egg-milk mixture, along with a good shake of cinnamon. Use brown sugar or maple syrup.