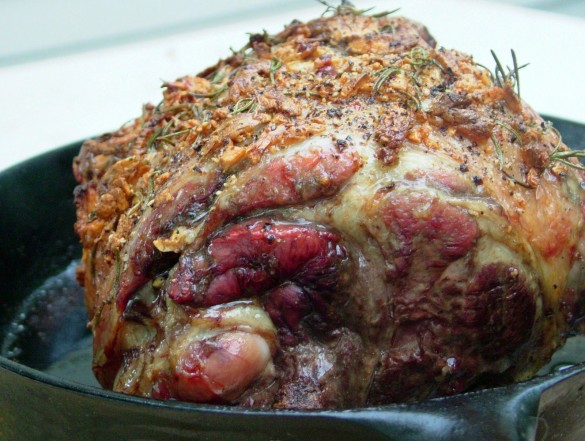 It would never in a million years occur to me to pop a leg of lamb in the oven on a plain old Monday night. But on Saturday morning I pulled the thing out of the freezer when I invited my sister over for dinner, and forgot about it when she went out of town and I decided to make Otsu instead. Which in turn got bumped for chicken shawarma. See what happens when I plan ahead?

So I spent altogether too much time this morning perusing recipes in an attempt to do something lamb-worthy; after all, the chunk of meat was $18. Then again, that’s less than ordering pizza, so what’s all the fuss about?

I was too mad at the rain to grill kebabs, and in the end decided that since it was a nice, even, bone-in piece of leg without the shank, I’d just straight-up roast it. Roasting a leg of lamb is very similar to roasting beef – the tricky part is the shape of it – the uneven thickness of the leg makes it difficult to roast evenly. At the thicker sirloin end and in the middle it’s very fleshy, but then it tapers down to the shank, which has very little meat. It’s common to end up with one end overcooked, while the middle beside the bone is still nearly raw.

The best way to combat this is to have the butcher remove the hipbone and aitchbone, then tie it with string to make it as uniform in shape as possible. Or you could buy a boned leg of lamb, which you can stuff, or cut and lay flat, or tie up and have it be pretty uniform.

It also helps to roast a leg of lamb on a rack in a roasting pan, so that the heat can circulate around it and the part resting on the hot pan doesn’t get overcooked. This also makes it easy to rotate the meat as it cooks, which will also help ensure it gets evenly cooked. I’ve heard that slow-cooking is a good method for lamb, but thought I’d save it for shanks or an awkward whole leg (as if that will likely happen this year). So all I did was make a paste with 5 cloves of garlic, a twig of rosemary and a spoonful of olive oil and rubbed it all over the roast, then showered it with pepper and coarse salt. The oven was at 450F for the bagels Emily and I were making, so I took them out, put the roast in, and turned it down to 350F. This flash of high heat browns the exterior, caramelizing it a bit and adding flavour. (It doesn’t “seal in the juices”, as is commonly thought.)

It stayed in the oven for about an hour and a half, and I slid a pan of new potatoes tossed in oil underneath about halfway through. (I was too lazy to add garlic or anything else.) When the lamb was done and needed to rest for 10 minutes or so, I left the potatoes in and cranked the oven up to 450F again to make sure they were nice and dark and crispy. Of course, lamb requires mint sauce. I do have a dusty bottle of the stuff on my shelf, but it occurred to me that this might make good use of the mint that’s currently taking over my lawn: 1 cup vinegar (whatever kind you think), 1/3 cup sugar and a big handful of torn fresh mint leaves. Shake it up in a jar.

I’m generally too lazy to make gravy. Whatever drippings are there are typically left to maybe be picked at, maybe get cleaned up and if I’m lucky end up in soup stock (if it’s chicken; minus the fat). I rarely roast beef and lamb. I do love the crispy bits and dark sludge that end up in the bottom of the roasting pan though, and so this time I spooned off as much fat as I could, and not wanting to flavour it with wine or dilute it with stock, instead I stirred in the tiniest dab of butter (about half a teaspoon) with a fork, working all that yumminess off the bottom and sides of the pan. My intention, actually, was to (ingeniously, I thought) wilt a bag of spinach in the small amount of buttery drippings, but when I pulled the bag out of the fridge I realized it had been in there longer than I thought. So I dribbled the few tablespoons of what amounted to pure meat heaven over the lamb, and we forgot to use the mint sauce altogether. As it turns out, this was one of the easiest meals I’ve done. Seriously. Why are roasts always reserved for fancy occasions?

7 comments on “Day 161: Roast Leg of Lamb with New Potatoes”

No need for napkins. #cleaneating #eatclean

Said and I were asked to taste sourdoughs from aro

All that butter poking wound up in the print editi

This is my favourite part of all the butter storie

My work here is done. (Sterling!!)

We connected over butter. I always knew we would.