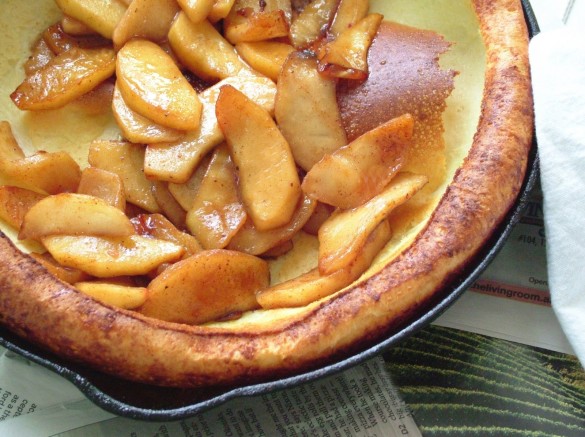 Again, today I am playing the brunch card, because it was far more interesting (from a recipe perspective, anyway) than dinner.

Let me take that back. Dinner was great, but my sister made it and I can’t take credit. Besides, I think everyone who eats should be able to make a puffed apple pancake; one of the simplest things you can make and also the most impressive if that’s your goal. People rave about these. Restaurants become famous for them. They take about 3 minutes to stir together and 15 to bake. Besides apples, you could fill the hollow with sautéed pears or bananas, or roasted plums, or fresh berries and whipped cream; absolutely anything you can dream up.

I made this, of course, because Father’s Day had to be recognized in some way beyond my getting up early to go wait in the extra-long Father’s Day Line at Tim Horton’s. Puffed apple pancake was Mike’s favorite eons ago, back when I figured out I could wow him with food, but I haven’t made it in years. I think we had puffed apple pancake overkill, but we’re over it now.

A puffed pancake is really just a popover or giant Yorkshire pudding (I just realized the irony in posting a recipe for essentially a large Yorkshire pudding alongside a roast beef, when the two have absolutely nothing to do with each other), which is made from a mixture of egg, flour and milk. It’s leavened by eggs without having to beat the whites, and bakes up all light and crunchy in a hot oven. Seriously easy peasy, as a certain UK chef might say. Sturdier fruits can be sautéed first and baked right into the pancake or set aside to be served on top. Fragile fruits like berries or bananas are better served in the hollow of the finished pancake, which rises even more dramatically when the batter is baked alone.

Peel (if you want), core and slice the apples. In a large skillet (if you have an ovenproof one, use it), sauté the apples in the oil and butter over medium heat for a minute or two. Sprinkle them with the sugar and cinnamon and cook until they start to turn golden. Remove them from the heat.

Whisk together the eggs, flour, and milk. Don’t worry about getting all the lumps out. Now you can proceed one of two ways:
1) Pour the batter over the apples in the skillet and put it in the oven. (If you don’t have an ovenproof skillet, pour the sautéed apples into a pie plate and pour the batter over them.) The apples will bake straight into the pancake, but it won’t rise quite as high with the fruit inside; or
2) Remove the apples and set them aside to serve on top, then pour the batter into the hot pan. This way the pancake will rise even higher and look more dramatic.

Bake for 20-25 minutes, until the pancake is puffed and golden. Cut it into wedges and serve warm with the fruit and a drizzle of maple syrup or dollop of vanilla yogurt. Serves 4.

Puffed Berry Pancake: Omit the apples altogether. Drizzle the ovenproof skillet with a little oil or spray it with nonstick spray, and pop it in the oven for a few minutes to heat up. Pour the batter into the hot skillet and bake as directed. Fill the puffed pancake with fresh berries or other sliced fruit, and serve with syrup or vanilla yogurt for breakfast or for dessert with vanilla ice cream or whipped cream. OK, I’ll post a roast beef recipe too, since technically that was dinner. I very rarely make roast beef, and it may not happen again this year. The problem with most roast recipes is that the roasting time is based on weight, when shape usually has more to do with it. A very thick roast will take longer to cook than a thin one, since the distance from the outside to the interior is further. So a basic rule of thumb is: the greater the surface area, the faster the cooking time. It makes sense that a round roast will take longer to cook than a long thin one, even if they weigh the same. Oven thermometers have made our lives easier when it comes to roasting meat, but if you don’t have one you can still get by just fine.

There are two methods of roasting: fast or slow, and the method you choose depends on the type and cut of beef you have and how you want it to turn out. When roasting is done quickly at a higher heat – 450°F or so – it caramelizes the exterior of foods while slowly cooking the interior. The outside, having been exposed to high heat for a much longer time, will be considerably more well-done than the inside. On the other hand, slow roasting won’t produce a crusty exterior, but the roast will be more evenly cooked throughout. Slow roasts are also very tender, since the longer cooking time enables any tough connective tissues break down. The good news is, you can have the best of both worlds: start the roast at a high heat to produce a flavorful crust, and then drop the temperature down and cook it until it’s done to your liking, or do it the other way around. (Contrary to popular belief, searing the exterior of the meat at high heat does not “seal” the juices in, but rather creates flavor by caramelizing the exterior.) If you have an oven thermometer, stick it in at a 45° angle so that the end is right in the middle of the roast.

To do a slow roast beef, start with an 8-14 lb. boneless rolled roast. When it’s time to turn the oven down, turn it to the lowest possible setting and leave it for 8 hours. Make sure you don’t open the oven door during those 8 hours. (Tape it closed to so you don’t forget.) After 8 hours have passed, turn the oven up to 350°F for 20 minutes to heat the roast through. Pull it apart with two forks, and if you like, douse it in barbecue sauce and serve on soft buns.

3-4 lb. (1.5-2 kg) boneless sirloin or eye of round roast (top and bottom round are good choices too)
Salt and pepper

Let the meat stand at room temperature for half an hour before you cook it. Preheat the oven to 450°F, making sure the rack is in the lower-middle position.

Put the roast on a rack in a roasting pan – leave the string on and put the fat side up, if there is a fattier side. Pat the meat dry with a paper towel and season well with salt and pepper. Add about 1/4-inch of water to the bottom of the pan, put it in the oven and immediately turn the temperature down to 350°F.

Cook the roast until a meat thermometer inserted in the center registers 120°F for rare, 125°F for medium-rare or 130°F for medium. The cooking time will vary from 10 to 20 minutes per pound, depending on the size and shape of your roast.

Remove the roast from the oven and transfer it to a chopping board or serving platter. Tent it with foil and let it rest for 15-20 minutes before slicing. The resting period is important – it allows the meat to relax (it tenses up as it cooks) and the juices to redistribute throughout the meat. (If you were to cut into the roast right away, a lot of the juices would still be moving around and would pour out onto the plate, leaving your roast dry.)  Serves 6-8.

8 comments on “167: Slow Roast Beef on a bun, after Puffed Apple Pancake”