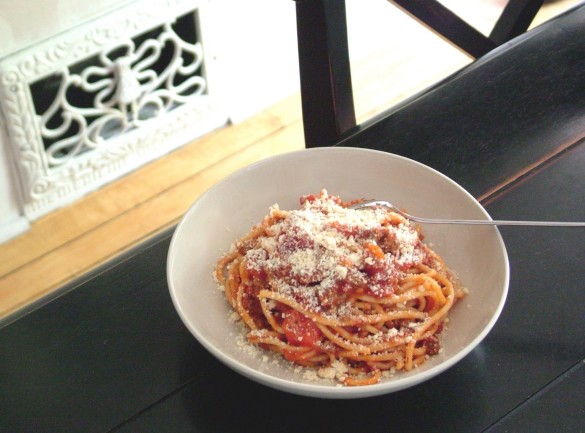 Sorry. I know, spaghetti ranks right up there with Cheerios when it comes to interesting dinners. It’s what Mike suggests when we’re tired and can’t think of anything else to eat: as in, “why don’t we just have spaghetti?” But it’s so boring! I always whine. I’m not sure why – I do like the stuff. And clearly it’s not something we eat five nights a week.

I’m working afternoons today until Friday, filling in for Jenny Howe doing the afternoon traffic on the Homestretch on CBC Radio One. Today we had a baby moose on Springbank Road, a fleet of chicks trying to cross Deerfoot, a deer, a fire, and I don’t know how many collisions. It was insane to keep on top of. So Mike made dinner. Spaghetti with the plainest of sauces; sauteed onion, red pepper, and about half a pound of ground bison, which I know I’ve mentioned before has less than half the fat of ground beef, and is leaner even than skinless chicken, turkey or even halibut. The problem with bison is that it typically gets treated like beef, thus overcooked and dried out, and then people think they don’t like it. It’s not at all gamey; if you’re hesitant to give it a try, ground bison in spaghetti sauce or chili is a safe first step. Half the cooked up onion-pepper-bison combo went into a jar of President’s Choice Extra Garlic tomato sauce (our current favorite, and superb as a pizza sauce) for the spaghetti, and the rest got turned into chili with the rest of the can of black beans from yesterday. (Chili is always better after a day or two in the fridge, so tomorrow night is already taken care of.)

Apparently the pasta got overcooked when he had a bit of a crisis, realizing the movie (the new Bob Dylan one with Cate Blanchett – very excellent if not a little cryptic, except that I fell asleep halfway through) was due back like right now and the pasta was on the stove, and he had to gather up the dog and kid and make a run for it. But when I got home hungry and all trafficked out there was a pot of spaghetti on the stove, it was absolutely delicious.