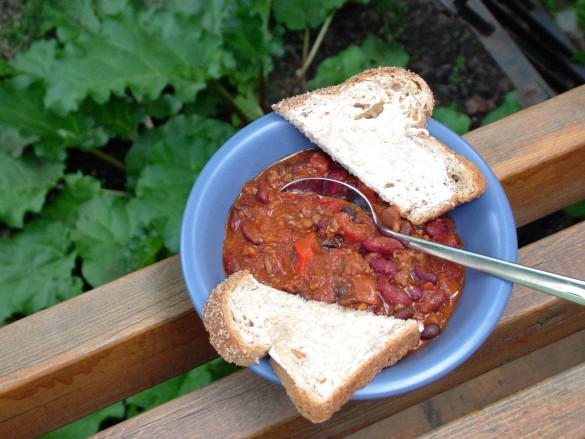 Yes, I know, I am an extraordinarily boring person this week. Sorry about that. Sorry too for the hideously blue bowl I decided in haste to dish my boring chili up in, not even thinking (after 170 days) that I would be required to take a photo of it. I’m particularly proud of my buttered sliced bread garnish – it reminds me of dinnertime images of the 50s when they’d put out a section of Wonder Bread slices in a serving bowl on the kitchen table. (This is not Wonder Bread. It is grocery store sliced bread, but at least it’s whole wheat. Honest. When I see Wonder Bread I can’t not think about Clarissa Dickson Wright’s reference to “slimy white slice”.) Tomorrow promises to get more interesting, as I’m cooking for my Dad’s birthday on Saturday and Ramsay Rocks on Sunday, an event I’m emceeing (and cooking for the volunteers – there will be plenty of food for everyone else though). You should come.

I do have a confession to make: I love anything tomato-saucy with buttered bread. I have been known to make a spaghetti sandwich, just to create a vehicle for the tomato sauce. Sometimes I just scoop up chunky tomato sauce leftovers with bread. W tried to mimic me tonight and made quite a mess of the patio. Lou was happy though. (I mean John Cusack.)

Again, chili isn’t even particularly summery. But it is cowboyish, and Stampede is coming up faster than I care to acknowledge. When I was 12, I won the Calgary Stampede Chili Cook-off. (The adult one, not a special cook-off for kids; let me tell you, there were some mighty unhappy contestants who took their chili very seriously and were not at all pleased to be whupped by a 12 year old girl who sort of threw a bit of this and that in the pot and then didn’t even particularly remember her recipe.) This year, I’m hosting the second annual kids’ chili cook-off at the Stampede on Kids’ Day. We don’t have enough contestants yet, so if you have kids under 14 who are interested in entering their chili – the winner then gets to make their recipe on the ATCO cooking stage and be on TV, if they want to – email me!

I have never used a recipe for chili. There is no reason to. I cook up some lean ground beef or bison with a chopped onion, maybe a red pepper, in a drizzle of canola oil, then add a couple cans of beans, drained to get rid of the salty bean sludge (I like things beany – red kidney beans for sure, sometimes baked beans in tomato sauce, sometimes white kidney or black beans) a big can or two of diced tomatoes (whole is fine too), and about a cup of salsa if I have some. A good heaping tablespoon or so of chili powder – which is really high in fiber, being simply ground up dried chiles – and sometimes a small spoonful of cocoa and/or instant coffee or espresso, just to give it some depth and colour. Coffee is the cowboy way, after all. Decaf works just as well. Simmer it all for about an hour to break down the tomatoes. That’s pretty much it. If you want to add a can of tomato paste, that’s always a good idea – tomato paste is such a great source of lypocene – much higher than fresh tomatoes, as they have been cooked down and condensed. Tomato paste is also great as pizza sauce. It’s nice and thick, and quite sweet tasting, being just pure tomatoes. Kids love it. The biggest flavour factor when it comes to chili is time – I always let it sit in the fridge for a day or two before we eat it. It’s edible of course the day you make it, but always better after a day or so. It also freezes very well.

For some reason, yesterday’s spaghetti and today’s chili tasted fantastic. No thanks to any particularly stellar culinary skills, but more likely due to the fact that I spent a good 4 hours completely secluded from anything edible in the CBC newsroom beforehand. They are really onto something with this concept of bon appetit.