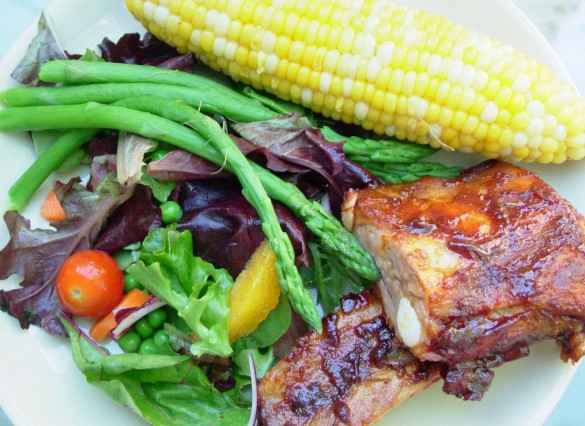 It was a potluck last night for my Dad’s birthday; ribs by his request, and potato salad, and we filled it out with corn and greens and asparagus.

To be honest, I passed on the potato salad, which my sister had thoughtfully made with fat-free Miracle Whip in consideration of my Dad’s high cholesterol, and which as a result had that unappealing translucent sheen to it. It did remind me though that I need to make roasted potato salad soon in order to illustrate my favourite cooking method for potato salad: roasting, which not only adds far more flavour and a better texture than boiling (which would you rather eat on its own?) but creates this crispy crust that doesn’t allow the potatoes to absorb as much mayo as they otherwise would, had they been boiled. If you really want to win friends and influence people, you could cook a few slices of bacon and then roll the potato chunks around in some oil and the bacon drippings before roasting them. You then of course add the crumbled bacon back to the salad along with the chopped celery, hard boiled egg, and all that. My Mom had been to the market and bought some kettle corn, which we all picked at while preparing dinner. So it wasn’t homemade, but I do have a recipe anyway:

This is a little more caramelly than regular kettle corn, but it’s the same perfect marriage of salty, sweet and crunchy. It’s really fast and easy to make when you need a caramel corn fix.

Place the popcorn in a large bowl. If you like, spray the bowl first with nonstick spray to keep it from sticking.

Combine sugar, water and butter in a small saucepan over medium heat. Bring to a boil, stirring constantly. Reduce heat to medium-low and simmer for 10 minutes, swirling pan occasionally but not stirring, until the sugar is deep golden. Immediately pour over the popcorn and quickly stir to coat. Tongs work great for this!

Cool and eat. (It’s usually cool enough for me by the time I get from the kitchen to the living room.)

Chocolate Popcorn: once the sugar is deep golden, quickly stir in 2 tbsp. cocoa and pour over the popcorn, tossing to coat.

Dad also requested a flourless sunken chocolate cake, one he remembered having years ago that he described as “meringue-y”, which my Mom had found in a magazine that has since been packed away in preparation for their move. So she flipped through her Joy of Cooking and found another sunken chocolate cake, which was not at all meringue-y but made with a full pound of bittersweet chocolate, no flour and very little sugar, it was as my sister described: “like chocolate fudge sauce in cake form”. But not puddingy; very dense, and softly, finely crumbly, and just intense. Like the very best kind of chocolate cake (I’m not really a fan of traditional chocolate cakes), it was perfect with ice cream and berries. It very nearly didn’t happen at all after one of the grandkids (not mine) spooned a big glop of melted chocolate into her ten carefully separated egg whites just as she was about to beat them to stiff peaks (she doubled the recipe to feed 8 adults and 3 kids). 1 lb. bittersweet or semisweet chocolate, chopped
10 Tbsp. butter, cut into pieces (although I suspect you could get away with much less)
5 large eggs, separated
1/4 tsp. cream of tartar
1 Tbsp. sugar

Preheat the oven to 325°F and grease an 8″ or 9″ round cake pan, then line the bottom with a circle of parchment or waxed paper.

Put the chocolate and butter in a large heatproof bowl, and set it over a pot of simmering water. Stir until melted and smooth.

Separate the eggs, being careful not to get any yolks in the whites. Whisk the yolks into the melted chocolate. Beat the whites along with the cream of tartar with an electric mixer until soft peaks form. Gradually beat in the sugar and continue beating until the eggs are stiff but not dry.

Using a rubber spatula, fold the egg whites into the chocolate mixture about a third at a time, being careful not to deflate the eggs. (Don’t worry if the mixture is still a little streaky.) The recipe instructs to put the pan into another pan and pour enough boiling water into the outer pan to come halfway up the side of the cake pan, but since it was doubled and divided among three 8″ pans, my mom didn’t have a big enough roasting pan, and dinner was ready, and so we just threw them in the oven as is and they were just fine.

Bake for “exactly 30 minutes”. The recipe further says that the top of the cake will have a thin crust and the middle will be gooey, which it was not. I don’t think I’d want it gooey though, now that I’ve had it thoroughly cooked through. It also tells us to refrigerate overnight, which we obviously didn’t do; rather, the cake was warm when we served it, and delicious.

Day 174: Two scoops of raisins over those nutritious flakes of bran