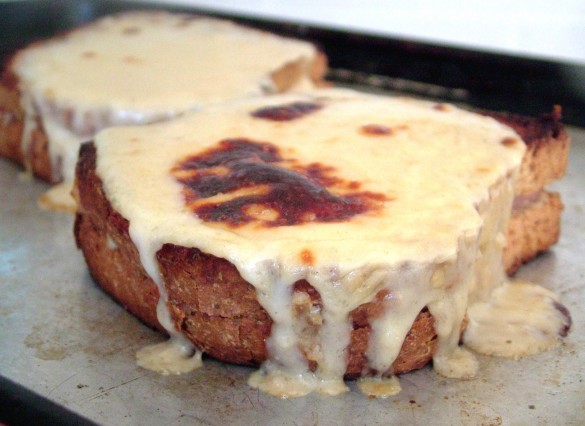 Or as someone slightly more eloquent might say, Croque Monsieur.

I love it when dinners come about like this: last week, Pierre wrote about Mr. Crunchy in his food column in Swerve; generally I would glaze over a story about grilled ham & cheese (as you may very well be doing right now), but I like Pierre. Not a whole lot must have sunk in except the name of said sandwich, because tonight I was still under the impression that a Croque Monsieur was ham & cheese dipped in egg and fried (actually a Monte Cristo). I had the kids, and all they wanted to eat was grilled cheese. But my sister was coming home from work to eat dinner with us, and I didn’t want to feed her a plain old grilled cheese. I found a package of ham I had forgotten I bought, and remembered Mr. Crunch.

Searching around, I found a lot of CM (or MC) recipes that were simply ham & cheese, and then a Barefoot Contessa recipe as well as one credited to some café in Paris (if I ever went to Paris, I might know the place; sadly all my dineros go to accountants and dentists and other non-glamorous places… and a new roof, furnace, washer and dryer and gas stove are on my to-spend list before trips) that was made of ham & gruyère, with a gruyère cheese sauce poured overtop and broiled. It’s sort of part fondue, part Welsh Rarebit (if you made it with some ale and mustard and Worcestershire).

I never have gruyère. I had gruyère! So I couldn’t really not make it, could I?

So I dismissed all the way-too-elaborate instructions to broil the bread, spread with mustard (and sometimes crème fraîche), top with cheese and ham and another slice of bread, broil again, and then top with the cheese sauce and broil – I just made a grilled ham and cheese with gruyère, made the cheese sauce (seriously the easiest thing in the world – melt 2 Tbsp. butter or oil in a pan with 3 Tbsp. flour, whisk until melted, whisk in 2 cups of milk, heat until it bubbles, and stir in a couple handfuls of grated cheese), poured it overtop of the sandwiches and ran it under the broiler for two minutes.

For future reference, a Croque Monsieur with a fried egg on top is a Croque Madame. (Ms. Crunch.) Mike would have loved this, like he’s favourite Vera’s fried-egg burger in Vancouver, but said he’d better not. We balanced Mr. Crunch out with a green salad and a big bowl of Ichiban salad, which my sister got all excited over. The best way I know of to eat my cabbage.