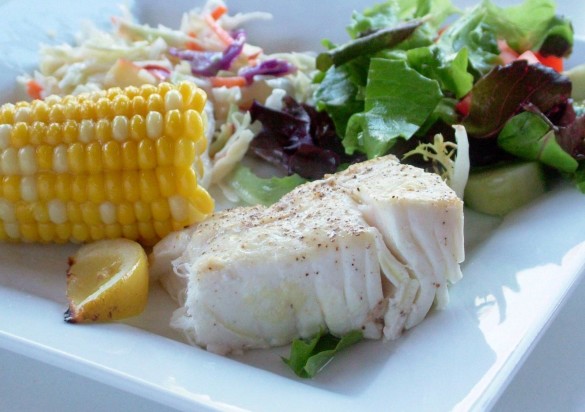 Halibut tonight – so fresh it was completely low-maintenance. We were all tired and hungry, wiped out from the sun and wind and covered with sand, and felt not at all like cooking dinner. My mom brushed the fish with olive oil, sprinkled it with salt and pepper, and tucked lemon wedges between the slabs to keep them moist, then broiled the lot on high for a few minutes, just until the fish flaked on the edge but was still juicy in the middle. I love thick, meaty halibut, and even W ate it (granted, it was dipped in ketchup), but one of the best elements of the whole meal were the slightly charred, caramelized chunks of lemon. (Mom says as I write this: don’t forget to tell people to suck on the chunks of lemon.) Alongside, the requisite corn on the cob, a bagged coleslaw (I think these go for around $7 in Tofino) doctored up with a grated apple and throw-together dressing of low fat mayo and grainy mustard, and a lemon meringue pie that I confess was made out of a Sherriff’s pie filling mix I found in the cupboard of the snug (the teeny shack that was on the property when they bought it, which they have been shacking up in for the past year or so) and a purchased Keebler crust. That’s the thing about cabin cooking – you don’t always have the equipment nor the gumption to make elaborate meals, but there’s really no need to. Fruit crumbles are generally my dessert/breakfast of choice, requiring no more than a knife, fork and some sort of ovenproof pan – this is my plan for tomorrow, using peaches from the beach grocery down the road, and then topped with vanilla yogurt. I’m also hoping to ditch W with Grandma and Grandad and sneak off to SoBo.

Here’s another example of by-the-seat-of-your-pants cooking: this afternoon I pulled together some emergency chocolate rations for the troops, when the cupboards were limited in terms of baking ingredients and Hugo can’t eat dairy or flour. The solution was so obvious it almost seemed silly: a bag of dark chocolate chips (or a bashed up chocolate bar, or leftover Easter bunnies, it doesn’t matter where the chocolate comes from) melted on low heat, and then any number of ingredients stirred in and the mixture dropped by the spoonful onto foil to cool. Like those old chow mein noodle clusters, or the peanut-chocolate clusters my mother in law makes that we always roll our eyes at and then devour the entire plate of. There’s a very upscale chocolaterie in New York that sells dark chocolate-covered Corn Flake clusters, and I have seen many a variety of ultra-expensive chocolate-covered potato chips (usually Pringles, it seems) that are, I think, always disappointing. I was going to stir in some of my homemade granola, but there is also a pecan allergy in our midst.

So. Into the chocolate went Rice Krispies, lightly crushed thick-cut plain salted potato chips (ever had chocolate and salt? how to satisfy a plethora of cravings at once – melty, crunchy, chocolatey, sweet and salty) and a handful of golden raisins, just because that’s what was in the cupboard and what no one was allergic to. They were fab. Next time I might stick to one thing at a time – just granola, or chips, or Corn Flakes, or pretzel sticks.