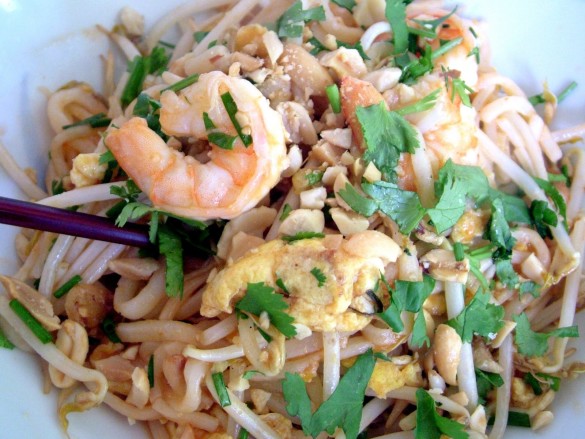 OK, what we really had for dinner was the last pickings of bison rotini, but I already told you about that. And W ate most of it, because we were still full from lunch; A came over and we sat out in folding chairs in the yard and drank cold pink fizzy wine and ate pad Thai, and that’s far more interesting.

I had promised to make it, and then when I went to soak my rice noodles I discovered I didn’t have any. I suppose my mission to deplete a seemingly bottomless stash of assorted pasta and noodles has been successful. We had fresh Asian noodles though, so I figured that was close enough.

Pad Thai is fast (if you get everything ready to go before you start), and a perfect way to use up leftover roasted chicken, tofu, or even pork, and if you keep a bag of shrimp in the freezer it’s easy to add a handful to dishes such as this. Tamarind concentrate and chili sauce can be found in the ethnic foods section of grocery stores or in Asian markets, and although not necessary are well worth seeking out – both will keep in the fridge for a long time, so don’t worry about buying a whole jar just to use a few spoonfuls. Yesterday we finished off Vij’s chicken curry and rice, but still had rice left over. When this happens and I’m not in the mood to make fried rice, I pour milk over it and bring it to a simmer with a bit of honey; the rice soaks up the milk and the starch thickens it and eventually I have a simple rice pudding. I was about to add some raw short grain rice to the pot, thinking that it could then be called risotto – so much fancier-sounding than rice pudding – and the thought reminded me of the barley risotto I made with mushrooms. Why not add some barley and make a rice and barley pudding? Which would sort of be a risotto? Hey wait, isn’t there a barley cereal with cream on the menu at Diner Deluxe? And isn’t it fabulous?

So I dumped, without measuring, some barley into the pot. Probably about half a cup, and then poured enough milk over to generously cover it. Rice puddings are easy to make this way – just cook until it soaks up the milk, add more, and so on. Sweeten with a little sugar, honey or maple syrup, and once it’s as thick as you want it to be, stir in a splash of vanilla.

The compote was my first jab at using up some of this rhubarb. A few stalks, chopped into a pot with a couple handfuls of strawberries, about a half cup of sugar (or to suit your taste) and a spoonful of orange juice concentrate straight from the freezer. Bring to a simmer and cook until it breaks down and resembles a sort of runny jam that isn’t as jammy-sweet as jam, but stands in for it just as well on bagels and toast, making either reminiscent of strawberry-rhubarb pie.