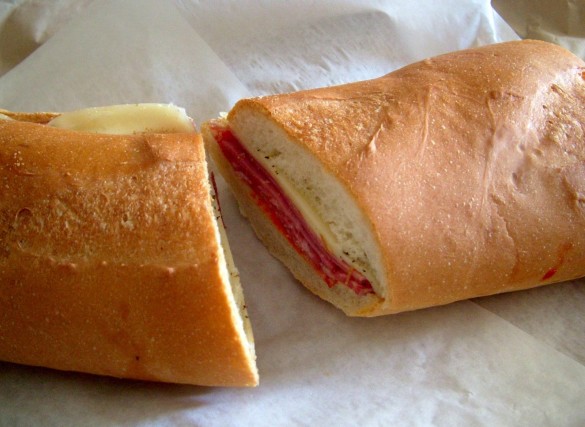 They called it panini at the Italian Market, which is really just a sandwich. A good one though, made with salami and cheese and mild vegetable spread (have you had that jarred red stuff, made with roasted peppers and eggplant and spices? Far better than mayo. You can get a spicy version too.)

We arrived in Edmonton late afternoon and stopped at the market on our way into town. (I’m here cooking at the SIP Wine & Food Festival at Capital Ex and Mike is going to the Indy. Apparently Gene Simmons is here too. I don’t think he’s staying in the same hotel.)

So that ended up being dinner – or at least the few bites I managed to get down in between flying expletives as I scrambled to get ready (I later discovered that the clock radio was set half an hour fast), find my lost wallet, and connect to the internet without success. Then I locked myself out of my hotel room. Probably karma.