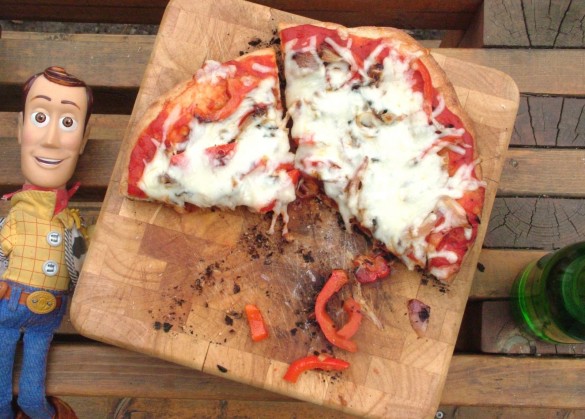 I went for a late lunch out this afternoon, and thus was filled right up for dinner. Unfortunately W and M still needed to eat, but I picked up an Afghan flat bread that resembled a pizza crust at a Mediterranean market for $2, and it turned into an instant pizza.

I almost didn’t want to cover up the fancy poke-holes in it. Honestly, the grill is the best place to cook a pizza. Closing it creates an oven environment, and the high direct heat is ideal for creating a crispy crust whether it’s fresh, frozen or just already baked, as was the case tonight. I only wish my first introduction had been with raw dough; I think most people fear trying it this way because they can’t believe the dough won’t fuse instantly to the grill. Trust me, it won’t. You just slap a rolled-out circle or oval of dough straight on the grill, flip it with tongs after giving it a few minutes to turn golden, then spread/scatter toppings on top, close the grill for a few minutes to allow the cheese to melt (because of course there’s cheese, right?) and voilà. Tonight I set the grill on medium, since the dough was already cooked, spread on some tomato sauce on with a spoon, sliced up a chunk of red pepper and wedge of purple onion (which W picked off anyway) and grated some part-skim mozzarella. Almost as easy as frozen pizza.