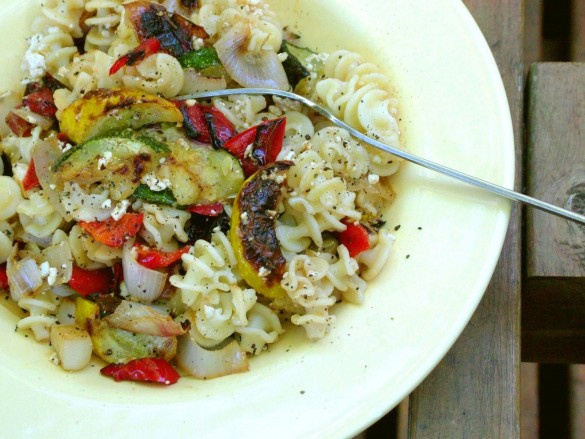 I spent most of today testing pumpkin recipes. Not a bad job, really, but one of the of the oddities of being a food writer is lead time – I’m often trying to find mincemeat in July for a Christmas article (not complaining) or trying to get into the Halloween groove on the August long weekend.

So by dinnertime I had picked at warm baking and licked my fingers so many times I didn’t feel like eating but felt the need for a proper dinner that included plenty of vegetables. I had a green and yellow zucchini going quickly south and a beautiful bunch of purple onions from the market – I wanted to grill them and the zucchini and some shrimp, and thought maybe I’d toss them warm with pasta and feta, but since I really wanted to add red peppers to the mix and all I had were diced and frozen, I chopped everything up and broiled it on a baking sheet instead. Someone had given me a bottle of basil-infused olive oil, which I used to toss the veg with on the baking sheet before roasting – something I quickly regretted when it released a hefty waft of licorice. Blech.

So I roasted the veg – purple onion, green and yellow zucchini, whole cloves of garlic and red pepper – with some oil, salt and pepper until they were well-browned and crispy (all of these veg are relatively soft, so none needed any lead time) and then scraped the lot off the sheet into some freshly cooked pasta (radiatorre in this case, which is similar to rotini – the last of the box I wanted to get rid of, and what I was making for W to eat with his meatballs as it’s easy to stab with a fork) and crumbled in some feta. It could have been enough as is with the garlicky oil from the veg, but I glugged over some balsamic vinaigrette too, turning it into sort of a cross between a warm pasta salad and a warm pasta dish. Everything could have been cooled – the roasted veg cooled to room temp and the pasta run under cold water – to make a similar cold pasta salad with balsamic vinaigrette. Either would go with grilled chicken or shrimp.