No, I wasn’t at a church supper – this is the name roadfood writers Jane & Michael Stern dubbed the combination of creamy macaroni & cheese topped with chili – a good enough reason to start going to church, I think.

But guess what. Today I hung out and had lunch with the Cirque du Soleil‘s travelling chef, and then she took me on a behind-the scenes tour of the Corteo Big Top. I went on the stage, and saw some of the performers stretching in the artists’ tent and everything. I’m not even ashamed about how much I gushed over the whole experience. How cool a job is cooking while travelling with Cirque for 4 years? The only thing that makes it cooler is that Amira rides her motorbike when they pack up and move from city to city. (I think she should have her own show on Food Network.) 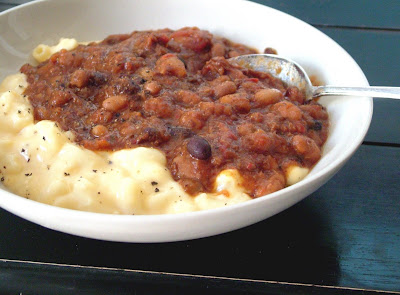 I assumed that with 150+ mouths to feed three times a day, the food would be pretty much foodservice; not so. Among Amira’s offerings were some of the best made-from-scratch mac & cheese I’ve tasted (I’ve been disappointed more often than not by restaurant mac & cheese) and homemade meatballs she made with ground beef, sauteed onions, breadcrumbs and cream, and they were ethereal. She simmered them in a tomato “gravy” (you know good old-school chefs when they refer to tomato sauce as gravy) that had started its life with the leftover bits of smoked beef brisket from a barbecue the night before, and was simmered for 7 hours before being pureed and added to the meatballs. Out of all the options I chose these two things mostly because I wanted to try them, but also because I love the combination of cheesy mac and tomato-saucy chili, and this was similar. I suppose both are more grown-up versions of macaroni and cheese with ketchup.

So this planted the seed for dinner. When I opened the fridge to evaluate our options, I discovered a small pot with the last of the chili we had a few days ago (lucky for me it improves after a few days) and so made some quick mac & cheese (just a creamy stovetop version, not crumbed and baked) to put it to bed on.