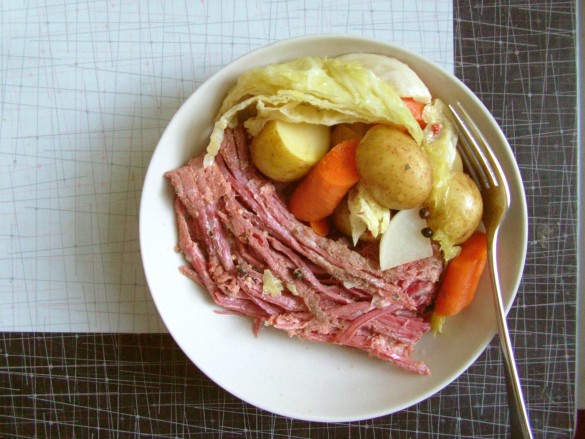 Today was not a good day for Spanx. It wasn’t the best day for a boiled dinner either, and I know, it could not sound less appetizing. Technically it wasn’t boiled, but slow-cooked. Either way an unusual choice – I’ve never eaten corned beef brisket before, let alone cooked one.

But. Every time I haul out my slow cooker (it’s not that big a deal, really) I get all giddy over it and go on a slow cooker kick for awhile before putting it away again. After the pulled pork fiasco I wanted to give it another go, so stopped at the grocery store on the way home and perused the meat section.

I’m not sure if you’ve seen those sealed plastic packages containing corned beef brisket in brine – they have them at Safeway, and every single time I see them I pause and ponder it, partly because they are foreign to me, and partly because Mike always said that corned beef brisket was the only thing his dad made for dinner growing up that was edible. His dad was famous for getting deals on cheap cuts of meat (shoes, really) and ancient chickens and boiling them in beer until they turned into some sort of unidentifiable jerky. Served with boiled-to-death potatoes and unpeeled carrots. And maybe some broccoli so mushy you could spread it on toast.

I figured a brisket, corned or not, was an ideal candidate for the slow cooker and so finally grabbed one, if only to shut up the little voice in my head that went hmm every time I saw them. For the past 20 years. (Mike and I started dating when I was 16. Or 17? Yes 17 – soon after the 1988 Winter Olympics. After having a crush on each other for a year and having teenage angst about it to everybody, our friends locked us in the basement at a party until we made out. Even then it took a good 4 hours to get the nerve up. So there you go – you know how old I am.) That adds up to a lot of time spent going hmm.

It turned out to be brilliant for the slow cooker – all I did was upend the package into the pot, cover it with water, and set it for 6 hours. (I wonder if Stephanie has tried this?) I was taking over traffic duties on CBC this afternoon and broadcasting live from Globalfest, so knew I wouldn’t arrive home until close to 7. After 6, Mike pulled the brisket out of its broth and set it aside, added some baby potatoes, chunked carrots and turnips (it seemed like a good fit) and wedges of cabbage to the broth – this is called New England Boiled Dinner – and it’s one of the recipes I pulled out of Cooking Light years ago and stuck in my to-make recipe binder. (Their photo looks far better than mine though.) So crank the slow cooker up to high and cook the veg until they are tender – or pour the broth into a pot and do the same thing – and you have these fantastically salty, seasoned veg to go with the meat.

The brisket did shred very satisfactorily with a fork – I love that. But overall I was less thrilled with it than Mike was. It was OK, but I wouldn’t likely make it again. Except the corned beef brisket part, which was damn tasty. It would make a fantastic Rueben, with saurkraut and Swiss cheese.

And I just realized that last night’s and tonight’s dinners rhyme – back bacon biscuit and corned beef brisket. Maybe Mike will write a song about it.

Day 227: (Canadian) Back Bacon on a Peach Biscuit