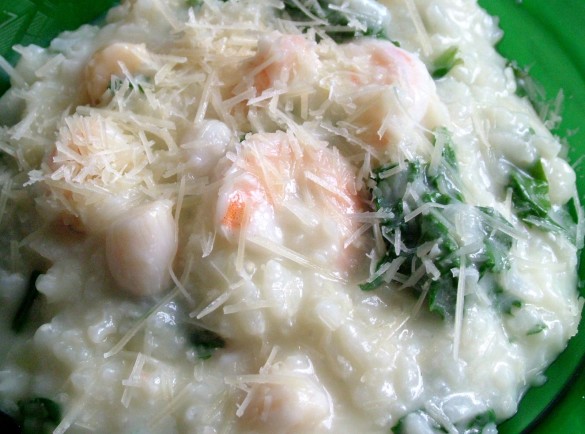 I’m starting to feel guilty now when I repeat myself in the kitchen. But on Friday, when I made a vat of ceviche for the party, the thrifty part of me threw the halibut bones and shrimp shells into a pot of water and made stock. Which wouldn’t fit in the fridge, so today I had to come up with some use for it. I wasn’t in the mood for seafood chowder, and one of the best uses of great quantities of stock is risotto. (My parents are under the impression that risotto is made with plenty of cream, which is understandable considering it’s so creamy, but this creaminess comes from the starch in the rice coming out to meet the stock, and of course the Parmesan cheese you stir in at the end. You could also add a dab of butter at this point, but I generally don’t bother.)

This batch was better than the last time I made it – I cut back the lemon to just a small squeeze from a bottle, since I really don’t like too much lemon with my seafood (weird, I know, but I think it tends to overpower it), and when I rummaged through my freezer to find some shrimp, I found a bag of small scallops as well, so threw a handful of them in too. Had anyone told me that risotto would become a regular in my kitchen a year ago, I would have said they were crazy. But really, it’s as easy as making oatmeal.

I even winged it this time (recipes, I think, can be far too rigid; unless you’re baking, there generally isn’t a need to adhere to strict ingredient measurements): a small onion, finely chopped and sauteed in a bit of oil and butter until soft; a handful of short-grain arborio rice (about a cup?) and between 3 and 4 cups of stock; then a handful of grated Parmesan, the aforementioned squirt of lemon juice, and about 8 shrimp and 10 scallops. (But who’s counting?) If you want a recipe, follow the one for lemon-Parmesan risotto and at the end, stir in as many raw shrimp and/or scallops as you like, which will cook in about 3 minutes, and then tear in a couple handfuls of fresh spinach or chard. As soon as it wilts, serve it in shallow bowls to eat on the couch with extra Parm to sprinkle on top. 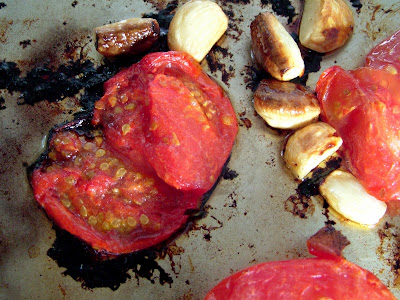 I went to the farmers’ market (Crossroads) late this afternoon, late enough that the vendors started slashing produce prices to avoid trucking it back home, and bought a bunch of slightly bruised but beautifully red tomatoes for 49 cents a pound (!!). Earlier, I was at my parents’ house helping them pack for their move, and left with a giant can of crushed tomatoes – so big you could use it as a bench – to do something with. I froze a bunch in ziploc bags, and the rest went into my largest pot with an onion sauteed in olive oil. I hacked the tomatoes in halves or quarters and put them on a rimmed baking sheet with a head of garlic, separated into cloves, and drizzled the lot with olive oil, then roasted them at 400F until they were soft and slightly charred on the edges. That got scraped into the pot, particularly the caramel goo stuck to the pan (add a little water or stock to loosen it if need be), and whizzed it with my hand-held immersion blender with a bit of salt and Italian seasoning. (Add some stock and you have a great roasted tomato soup.) 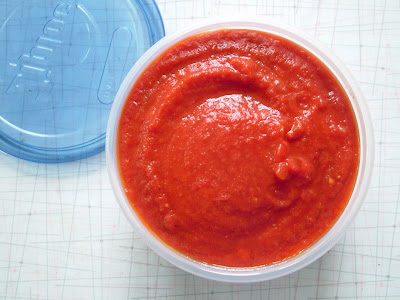 So now I have a good stash of tomato sauce to take me into fall. Fall! How could this be?

5 comments on “Day 237: Seafood and Spinach Risotto (and Roasted Tomato Sauce for later)”