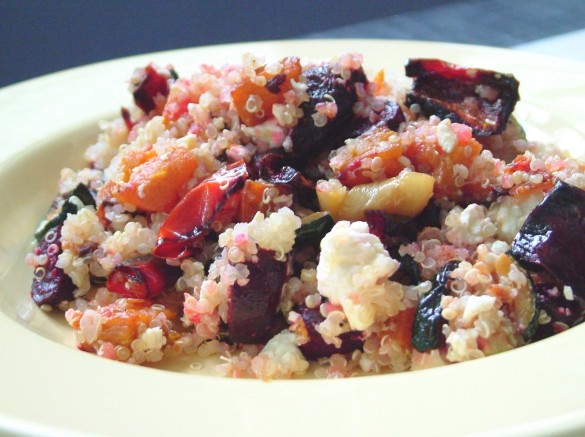 I know, it doesn’t seem much like a Saturday-night-of-the-last-long-weekend-of-the-summer dinner; I would have expected something more celebratory, but in reality it’s sort of cool and grey and I spent the day helping my parents pack (they are moving next week) and working on various assignments, so dinnertime wasn’t much of an occasion anyway. I had a lot of produce that needed to be used up, and not much gumption to come up with a creative use for them.

The easiest way to use up a yukkaflux of veg, in my mind at least, is to chop them all up, spread them on a rimmed cookie sheet, toss them with oil, salt and pepper and roast them (450F for half an hour or so, depending on the type of veg you use and how finely you chop); the resulting roasted veg would do well in a lasagna, or spread onto pizza, or turned into pasta salad. What we often do (have I yet this year? I can’t remember) is scrape all the crispy-sweet vegetables into a bowlful of couscous, and crumble in some feta. When I went to pull the couscous off my shelf I realized I had none. Unusual, especially when you consider the sheer number of bulk-section plastic bags full of grains and pastas and lentils in my cupboard. I dug around and located 3 bags and one jar of quinoa (pronounce it keen–wah, so tried it that way instead. It worked out just fine, and was probably for the best, nutritionally speaking. (Nothing wrong with couscous, but it’s just itty nubbins of pasta, so unless you buy whole wheat it doesn’t do a whole lot for you. Quinoa, on the other hand, is a nutritional superstar.)

You have to wash quinoa in three changes of water to get rid of any bitter residue; after that, boil it like you would pasta – in lots of water, for about 20 minutes, until the grains are tender and the little rings around them kind of separate from the grains. There are no measurements here – I diced a small sweet potato, two red peppers, a small zucchini, three already-roasted beets I had in my fridge (wrap them in foil and slip them into the oven when it’s on for something else – I think I put them in with the vegetable lasagna – then put the foil package right into the fridge and they’re there when you need them), and the peeled cloves from half a head of garlic. I put the zucchini in about halfway through since it’s far more fragile, and had I had a purple onion I would have added it too. The roasted beets, also, went in at the end, since they were already roasted and would otherwise turn the whole lot purple. Not that it matters, but it is having its photo taken. I ended up with a rimmed baking sheet-full, and cooked 1/3 cup of quinoa, and about 1/3 cup of crumbled feta, and it was far more than enough for the two of us. Also – we didn’t eat all the veg; I pulsed half in the food processor with some jarred tomato sauce and poured it over spaghetti for W. The beets in the sauce turned the pasta a creepy red, but W didn’t seem to notice. The rest will make a nice pizza tomorrow.

3 comments on “Day 243: Roasted Veg with Quinoa and Feta”