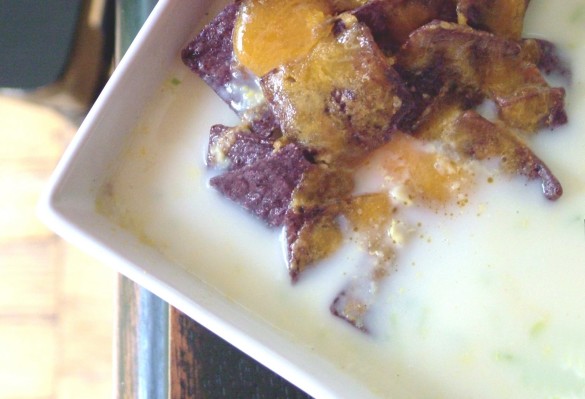 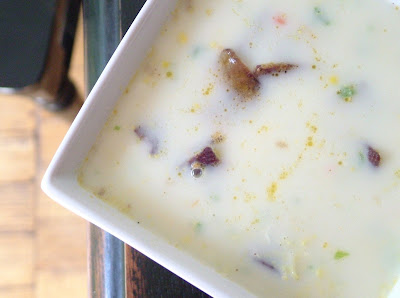 Corn is here. There aint much of it, due to our cool spring/early summer and stormy July, but it’s finally here. Just as summer is heading out the door.

I flipped through Nigella Express, which I picked up at the library (hey, I’m not independantly wealthy enough to buy every cookbook I want, OK? I forgot to marry rich) and she had a recipe for corn soup topped with tortilla chips and melted cheese, which I thought was rather brilliant. You know, like French onion soup is topped with crusty bread and cheese, only you use corn tortillas and cheddar or queso fresco or Monterey Jack. They weren’t weighed down with nearly enough cheese though; I fixed that. Or so I thought… when I went to float my nice organic blue corn tortilla chips on top of my soup, they quickly sank like a Battleship. (Good thing I gave it a spin before bringing it into the CBC studio tomorrow morning.) 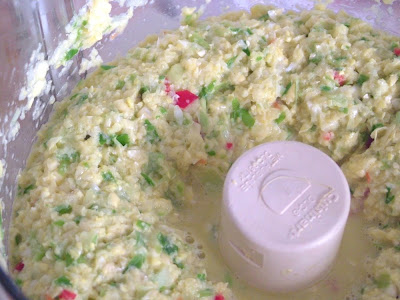 It was an easy soup to make; scrape the kernels off of 5-6 ears of corn (hold them upright in the middle of an angel food cake pan and cut the kernels off into the surrounding pan – or use 1 kg frozen corn, as N suggests) and put it into the food processor with a bunch of green onions (debearded) and a clove of garlic; I added a pinch of cumin and a seeded tiny small red hot pepper (she suggests sprinkling hot pepper bits on top, for garnish). Pulse it all up and throw into a pot with 1.5L of veg or chicken stock. Simmer 15 minutes, while you toast some tortilla chips topped with grated cheese. I wasn’t told to add a splash of half & half at the end, but it seemed to need it. Not much – not even a quarter cup; besides that, it contains no fat to speak of (remember that nothing was even sauteed in oil before going in).

It was OK. I mean, I didn’t hate it. I didn’t love it either. I just wasn’t that into it. Mike liked it, but he seems to be particularly easy to please these days, so not the best litmus test. Maybe if it was chunkier it would have supported the tortillas better? I’m curious how Nigella’s food stylists got the teepee of tortillas to hover on the surface of her soup without sinking. I didn’t add too much liquid. Perhaps not enough corn?

I paused just now and went downstairs and tried it one more time, now lukewarm. It has the potential to grow on me. It tastes exactly like something you should eat when you’re sick; fresh and reviving from all the green onion (more than the 3 the recipe called for) and tiniest hit from the pepper, which gives it just enough heat.

Maybe you can learn to love after all.