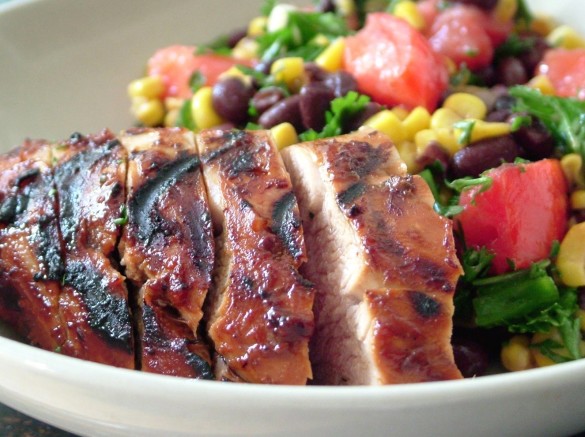 Although I’m still digesting last night’s “dinner”, I had the foresight to pull a pork tenderloin out of the freezer this morning. I buy them in packs of several because they’re cheaper, and when I get home from the grocery store divide them into plastic bags, sometimes with a glug of barbecue sauce or honey mustard or hoisin from a jar, and pop it in the freezer. They thaw quickly due to their shape, and cook in 15 minutes on the grill.

The corn salad came out of desperation to use up the 6 ears I bought on Friday – the novelty of chewing the corn off the cob has already lost its lustre for the season. (This tends to happen quickly around here, unless we’re at a cabin somewhere, in which case I could easily eat corn on the cob for breakfast lunch and dinner for weeks.) I still had some compound butter left in the fridge and so sliced the kernels off of 2 cobs and sauteed them in sizzling garlic-lime-chipotle butter until they were golden and slightly charred.

They were so good I ate them all with salt and pepper and had to start over.

Round 2 went into a bowl with a rinsed and drained can of black beans, a chopped tomato, and what was supposed to be cilantro but was instead curly parsley, due to Mike’s inability to differentiate between the two (throw Italian flat-leaf parsley into the mix and he’s really confused), but which worked out fine. In a jar, I shook up 1/2 cup of olive oil and 1/4 cup of lime juice with 1 tsp. cumin and a crushed clove of garlic, and the salad was fantastic. I’m always surprised at how sweet corn is in a dish like this, especially when it’s toasted. 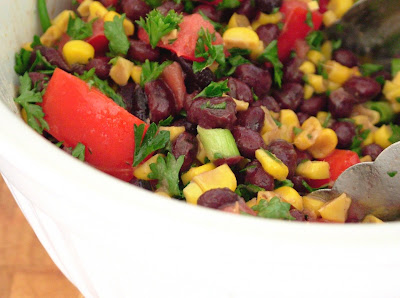 There are a lot of things I’d like to do with this salad (besides marry it); add crumbled feta, rice, chopped iceburg lettuce, grilled chicken, shrimp quickly sauteed in the same butter or grilled, or all of the above. I already have plans to add thawed shrimp from the freezer to the leftovers for lunch. Although it will no doubt be eaten at my desk in the spare bedroom, it would make a great portable lunch if I had to eat elsewhere. Maybe I’ll take mine to the park tomorrow and eat it on the grass, just because I can.