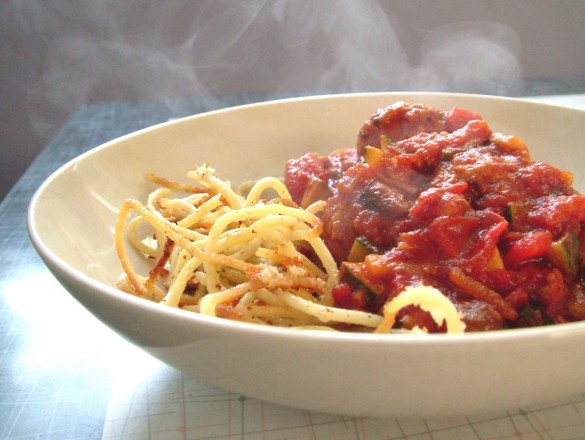 W chopped a whack of zucchini the other day while he was being photographed “helping” me in the kitchen. (By chopped I mean whacked into big awkward chunks.) So I grated some and used it as an excuse to make zucchini brownies; the rest I chopped and cooked up with some frozen meatballs (light Italian from Superstore) to make spaghetti and meatballs. To be honest, after judging a chili cook-off at lunch I wasn’t much interested in dinner. My stomach was still processing 18 varieties of chili.

I had a fleeting trickle of inspiration to try something new when I found a baggie of cold spaghetti in the fridge; I had read in Real Simple about pressing leftover spaghetti into a hot skillet with Parmesan cheese to make a sort of crispy spaghetti cake, and so gave it a whirl. If I had been more patient it might have worked, but I tried to flip it at the first sign of golden brown and the whole shebang didn’t come with it. It turned into a tasty mess though, and I picked at it before putting it under meatballs for Mike, who likened it to something made by someone who was such a bad cook she couldn’t even make spaghetti without burning it to a crisp. (You were supposed to cook some bacon first, then cook the spaghetti in the bacon grease. It would have been like a huge pasta carbonara chip.