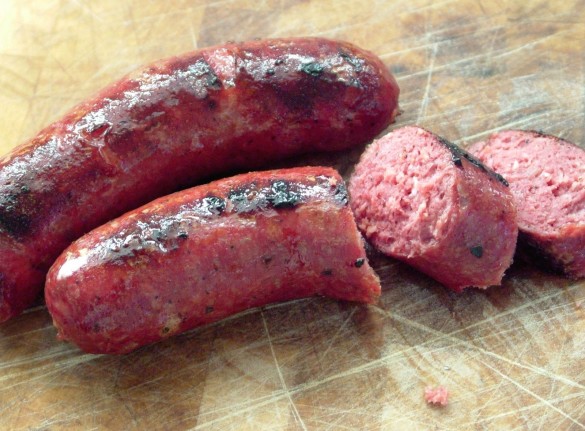 Tonight was another scramble to find something that might possibly pass as dinner at five to six.

There were some garlicky bison smokies in the fridge from Valta, and an aluminum take-out container I had forgotten about that contained half a slice of PB & banana French toast and the mountain of hash browns we got at Palomino on the weekend. A little disgusting, yes, but I felt this sudden rush of guilt that I had a) asked the waitress to package the leftovers, and b) we had used up a perfectly good take-out container. So when the smokies were getting crispy (they are very lean, so I skimmed the surface of my cast iron skillet with a bit of canola oil) I pushed them aside and rejuvenated the hash browns. It was done in under 10 minutes, all while talking on the phone (probably not as stealthily as I thought I was being at the time – sorry Sue). 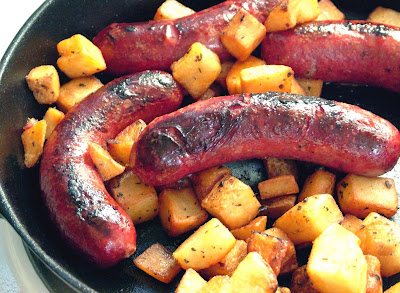 For colour, we ate the last of the peas from our garden (the shoots seem to have summoned a final growth spurt) and wee fresh-from-the-dirt carrots Sue sent in her produce care package from the Okanagan. With every bite we were forced to enquire, ““eeeeh… what’s up Doc?” (Here’s a Cliff Claven fact for ya: Bugs Bunny’s blasé, carrot-munching demeanor was inspired by a scene from the movie It Happened One Night, in which Clark Gable leans nonchalantly against a fence, eating carrots while talking to Claudette Colbert. In my world, Bugs is the preschool version of the Fonz.)