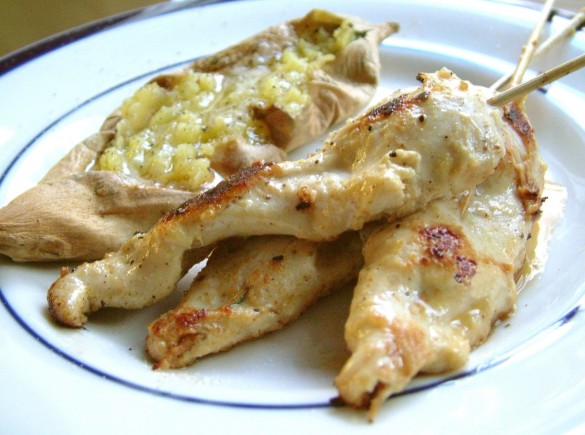 We scavenged for leftovers tonight; a few satay from the party last night, two roasted sweet potatoes from a few dinners ago, and W asked for oatmeal and a banana and pear. We had driven out to Turner Valley this afternoon (I love driving through the rolling hills in the fall) and went to Route 40 Soup Company for lunch, so none of us needed much. And later tonight I went to JaroBlue with some girlfriends for drinks and tapas (to sum: arrived at 8 – you can’t make reservations here but we had called ahead and were told they would accommodate us – went to the pub next door for drinks for an hour, came back, got seated outside at close to 10 while we waited for the two people seated at the large couch area that would accommodate the 8 of us to linger over their dessert, then cheese plate. We ended up having drinks, ordering our food and almost finishing it – although we hadn’t wanted to eat outside; it was nice enough to sit but a little chilly for food – before they left and we could move inside at around 11. The food was mostly really good but sometimes disappointing; particularly the molten maple cake, which did not, to any of us, scream maple. Tasty, but with far too subtle a whisper for something that calls itself a molten maple cake and must be ordered 20 minutes in advance, allowing for extra anticipation to build. The chocolate marquise and crème brulée are better bets.)

So for the party last night I bought a package of chicken fillets – the most expensive and most tender part of the bird; those little strips that sometimes come attached to the breast and are sometimes removed and sold for far more per pound. Sometimes I find them worth it; not only are they unbelievably tender (after marinating in yogurt there’s no real need to chew), they come pre-portioned in little strips that make ideal chicken fingers or satay. You might call them natures’ convenience food. They were marinated in a blend of yogurt, onion, garlic, ginger, curry paste and spices; whiz the lot in the food processor to a thickish sludge and pour over your chicken strips in a ziploc bag. (If you want to freeze them this way, the marinade acts as a sort of insulation against freezer burn.) I just realized I posted the satay recipe exactly 100 days ago, so I don’t have much to offer you now.

Except a brand spanking new Crock-Pot! 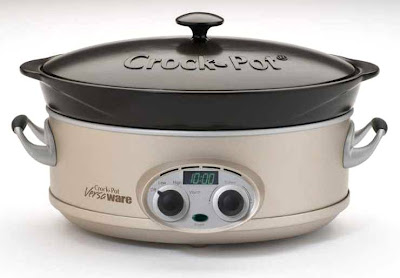 So one morning last week the doorbell rang, and I opened it to a FedEx guy who unloaded boxes and boxes of Crock-Pots into my front foyer. They’re for a foodstyling gig I have next week, and the PR firm in Toronto wanted to make sure I had extra. Two of them are programmable Premium EditionVersaware Crock-Pots with stoneware inserts you can remove and use in the oven and on the stovetop like a Le Creuset. Upon closer inspection I discovered one has my name on it, but the other is up for grabs. I immediately wanted to ship it off to one of you. But whom?

I noticed about a month ago SmittenKitchen held a contest for a reusable shopping bag. You had to post a comment to enter. She got 2536 comments. I had comment envy.

You may have noticed I get nowhere near 2536 comments, so your odds of winning are far better. If you leave a comment here (with your email address so I can contact you and find out where to ship it), the comments are numbered and I’ll choose a number at random and send it to the winner. While you’re at it, let us know what you had for dinner tonight (or last night, depending on when you read this – don’t worry, you don’t need to provide recipes), because I’m curious about what all of you eat. Like Laurie Colwin once said, “it is not just the Great Works of mankind that make a culture; it is the daily things, like what people eat and how they serve it.”

I guess we’ll need a deadline. Shall we say next Wednesday, October 8th, at midnight MST?