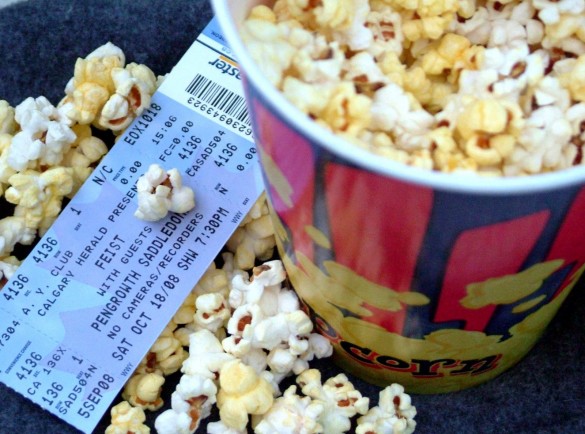 Mike had just put a frozen Dr. Oetker spinach pizza in the oven (W devours these as if they weren’t even covered with green stuff) when the phone rang; it was A asking if I wanted to come see Feist in a friend’s private box. Hmm.. work or Feist in a private box? I was there in 20 minutes.

There was quite a spread, but mostly I got sucked into the cheese platter and popcorn – love that Saddledome stuff, and there was a vat of it. Leftovers, just so you know, make the best caramel corn; you get all that buttery saltiness under the caramel. (Try adding a tablespoon of cocoa to the caramel mixture for chocolate caramel corn. Maybe for Halloween?)

So I suppose that counted as dinner, while M and W ate the aforementioned pizza. We had been grazing all afternoon; I skipped out of my other event at noon today to attend the best Jungle Party of the season – a third birthday where the snacks included egg salad sandwiches on white bread with the crusts cut off, ants on a log, spiders made out of blocks of marble cheese and chow mein noodles, and a DQ ice cream cake decorated with an elaborate safari scene from Madagascar.

(Thanks for the invite A&R!)