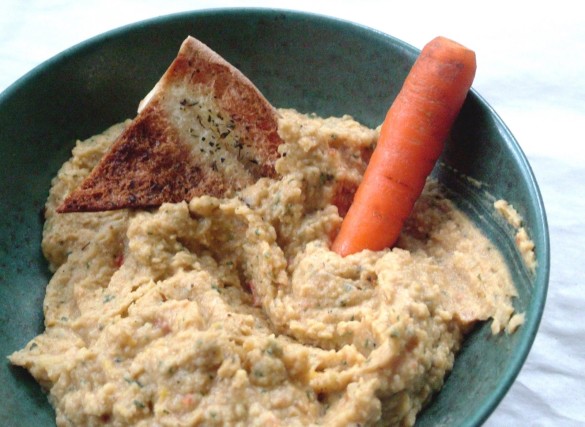 I was rummaging through the fridge, trying to identify the contents of the 7 or so yogurt containers in there. Some were yogurt. One was leftover lentil veg curry. It looked awful. And mushy. I wondered how to reheat it now that we don’t have a microwave (real estate in this kitchen is at its prime; the convection toaster oven won space with a view, close to all amenities). So on a whim, I put it in the food processor with a can of drained chick peas, a squirt of lemon juice and drizzle of olive oil and pureed it. It was perfect. I split and cut a few pitas, brushed the rough sides with a bit of oil and sprinkled them with Italian seasoning, and toasted them in the toaster oven to go with. (See? Microwaved pitas just wouldn’t have been the same.) And pulled out a bag of baby carrots from the market that didn’t even need peeling. This is the best kind of dinner when you’re eating at your desk. 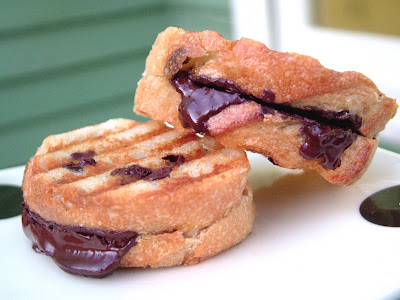 I know I’ve been promising chocolate panini for awhile. If you are at all a fan of the chocolate croissant, you should make this. (They are far lower in fat than a croissant, and far healthier if you use canola oil.) They are good for all occasions; they are perfect with coffee, or tea, or as dessert. They are perfect paired with wine. If you crank them out at a party, you’ll make everyone happy. (Come to think of it, these would make great warmish Halloween treats for grown-ups who wind up at your door.) My sister borrowed my panini grill one morning when it was her turn to bring breakfast to the staff room. I realize these classify more as dessert than breakfast, but if Krispy Kremes and Pop Tarts make the cut, why not a little wedge of bread and square of dark chocolate?

I just finished writing an enormous paragraph on how heat transforms two otherwise very utilitarian ingredients into something far more transcendent, and then accidentally erased it. And I don’t feel like writing it all over again. And I wonder already how I came up with so much to say on how to make something so simple.

So. You slice the bread fairly thinly on a slight diagonal (only because it’s easier to bite into a crust that isn’t straight up and down) – I like to slice once completely through, then once almost, keeping one edge of crust intact, and then another slice through, so that I end up with little bread books that I can tuck a piece of chocolate into, rather than worry about the two slices and chocolate sliding around on each other. Brush the outsides of the bread with a little canola oil, then grill in a hot panini press. If you don’t have a panini press, cook them in a hot skillet like you would a grilled cheese sandwich, with a second skillet set on top and weighed down with a large can or something heavy enough to squish it a little as it cooks.

(Once you’ve tried it the real-chocolate way, you can go ahead and make some with Nutella.)