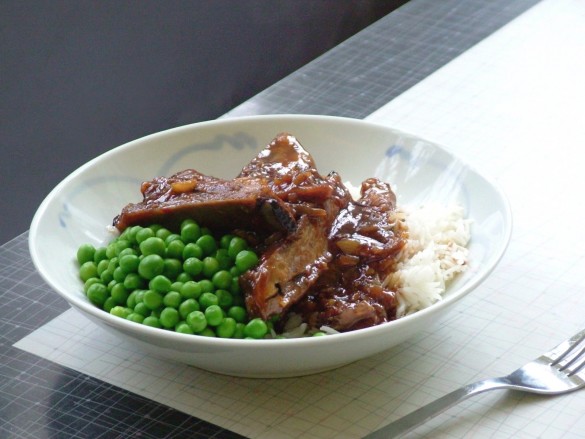 I love Halloween. I’m sure in part because it’s the day after my birthday and the two went together growing up, and undoubtedly because of the surplus of candy, and because the day after, everything turns all Christmassy. October-December is my favorite quarter.

W went out as Super Elephant, his own creation combining his new Superman PJs and a borrowed elephant suit. On neighbours’ doorsteps, he did this combo of Superman theme song, arms raised out front, and then elephant noise. This was all new to us.

For dinner beforehand, what’s more appropriate than gory, meaty ribs? I wish I had planned it that way; it would have been cereal had I not precooked two racks of ribs yesterday for BT and CBC this morning, and forgot to bring them to CBC. So while the day turned to twilight, the most exciting hour of my childhood (besides Christmas eve); the hour of almost unbearable anticipation waiting for it to get dark so that we could go out, during which we put final touches on our costumes and makeup and lit our pumpkins and sat at the table restless while our Mom fed us a proper dinner, I cut the cold rack into individual ribs and threw them into a pot with some ginger, garlic, soy, rice vinegar and sugar and simmered them while cooking some rice and peas. (These ribs would do well in the CrockPot too!) 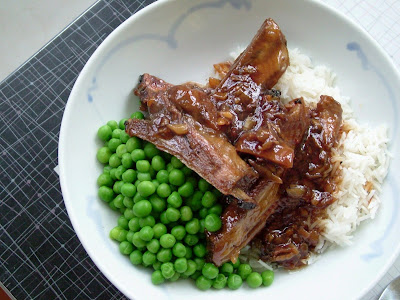 To make sticky ginger-soy ribs, put a rack or two of side or back pork ribs on a rimmed baking sheet and cover with foil; bake at 300F for 2 1/2-3 hours. This part can be done up to two days in advance; wrap them in the foil and refrigerate.

Sauté a couple cloves of crushed garlic and about 1 Tbsp. grated fresh ginger in a drizzle of oil in a fairly large pot – one that will accommodate the ribs. For about 2 racks of ribs’ worth of sauce, add 3/4 cup packed brown sugar, 3/4 cup rice vinegar and 1/2 cup soy sauce to the garlic and ginger. After baking the ribs in the foil, let them cool slightly, cut them into individual ribs, then add them to the pot. Simmer for about 20 minutes, so that the ribs absorb some of the sauce and heat through. If you want to thicken the sauce a bit, dissolve equal amounts of cornstarch and cold water and add it to the sauce; cook until it bubbles and thickens. Serve the ribs and sauce over steamed rice. 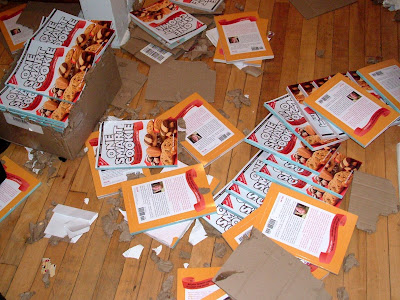 Today’s free stuff comes courtesy of Lou, who was bored/upset when we went out for a few hours the other day after FedEx delivered our Christmas shipment of the new One Smart Cookie. (For those of you who don’t know this was my very first cookbook, all low fat and reduced-fat cookies, squares, brownies and biscotti Lou personalized about a case and a half of them, distributing them throughout the front foyer, hallway and living room. A few were indistinguishable as books and had to go into the recycling bin, but the rest just have minor chews or scratches that range from obvious to barely noticeable but nonetheless unsaleable. (They are worth about $25 apiece; expensive chew toys.)

So rather than draw one name this time, I’m going to draw 20. This is the new, revised edition of One Smart Cookie, slightly licked/chewed. What did you have for dinner last night?

Day 304: Halloween Party Food and Dinner at the Farm