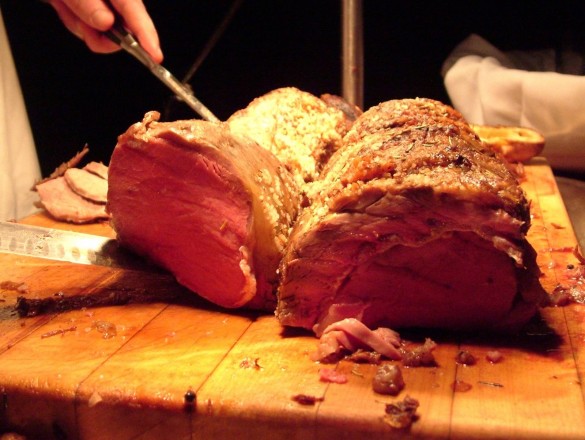 It was nice enough to start snowing late this afternoon, just as the last of the second group arrived for the final weekend package of Christmas in November. We walked around the lake and skipped rocks across the partially frozen parts, creating an eerie sort of space bird sound, had hot chocolate with whipped cream and chocolate shavings and then had hot baths and watched Wall-E while writing Christmas cards in our robes before Buffet #2, at which point the evening quickly deteriorated into a frenzy of chasing HellBoy as he ran through the crowd and attempted to disassemble Christmas trees, placating him with lamb chops and trying to maintain our composure as he screamed and spread-eagled himself on the ground in the middle of the high-traffic main doorway and refused to move.So when M took (or rather dragged) W back to the cabin (to answer the query – he has spent many nights in our room ordering room service, partly because he has a bum knee and W won’t stop, partly because three year olds don’t make ideal gala dinner guests, and partly to keep himself away from the free-flowing wine and martinis at the main lodge) I managed to sit and eat some dinner. I have a guest photographer tonight – while we ate Michael Olsen offered to photograph his plate, as well as the two tenderloins on the carving board at the head of our table. (My plate had a few token greens on it – his is far more accurate.)