When you get invited to a do at Bernard Callebaut’s, you go. This particular soirée was to reveal the chocolate dress Paul Hardy created with the Chocolaterie for the Salon au Chocolat fashion show in Paris. 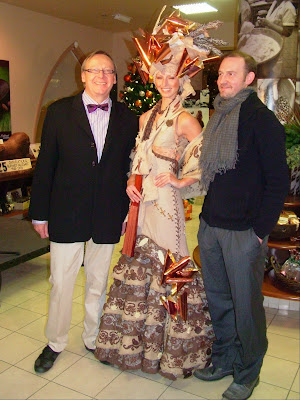 I went mostly out of curiosity – how does a dress made out of chocolate not melt? CB chocolate melts at 31 degrees; body temperature is around 37. And of course because it was being held at Bernard’s headquarters, and Bernard parties always involve plenty of chocolate.

Even hot in a cup, which I almost cried with joy over; I’ve been jonesing for real hot chocolate since leaving JPL. Bernard makes his with his chocolate shavings, of course, and Vital Green Farms whole milk. y.u.m. Reasonably, it was served out of wee espresso cups rather than the Venti-sized cups I was using in Jasper. Like hot chocolate shooters. If you’re in the hood, you can saddle up to his counter in the corner of the shop and get one for yourself. I don’t know why they don’t sell this stuff at every coffee shop in the city. (Mochas at Beano.) 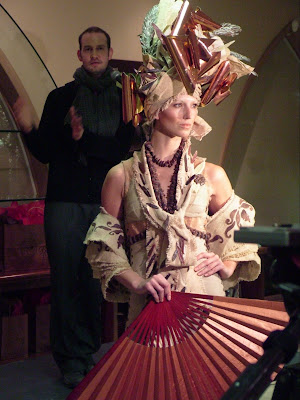 The dress in a nutshell:

Pleated upper bodice of silk tulle designed to mimic the steps of a Mayan temple; organic cotton bodice dyed in BC hot chocolate, overlaid with copped mesh to reflect the industrial revolution at the time when chocolate was evolving from drink to confection.

(Had it been up to me I would have chosen a more voluptuous model. Skinny just doesn’t scream chocolate the same way soft and curvy does. I’d settle for even a few curves, like Juliette Binoche in Chocolat.)

Since it was from 5:30-7 and I stayed for about three times as long as I planned to, I ate enough to count as dinner. (It wasn’t all chocolate; Dominique from the new L’Epicerie French Deli next door supplied plenty of puffy-pastry-cheesy things, and some duck and salmon things that looked great but I didn’t try.) M and W had leftover lamb, and whole wheat rotini, pumpkin loaf, and whatever else they could scrounge up. And I brought them a loot bag.

On the upside (I know, it’s all upside), if there’s anything that can break me of my mini Oh Henry habit it’s a box of Bernard Callebaut chocolates.